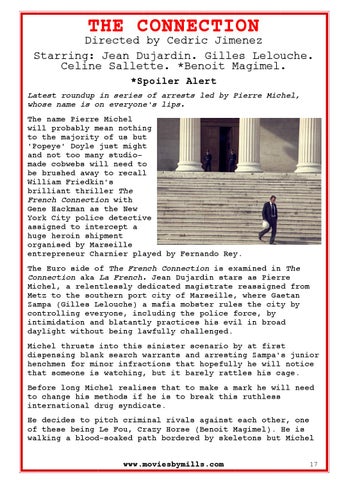 Directed by Cedric Jimenez Starring: Jean Dujardin. Gilles Lelouche. Celine Sallette. *Benoit Magimel. *Spoiler Alert Latest roundup in series of arrests led by Pierre Michel, whose name is on everyone's lips. The name Pierre Michel will probably mean nothing to the majority of us but 'Popeye' Doyle just might and not too many studiomade cobwebs will need to be brushed away to recall William Friedkin's brilliant thriller The French Connection with Gene Hackman as the New York City police detective assigned to intercept a huge heroin shipment organised by Marseille entrepreneur Charnier played by Fernando Rey. The Euro side of The French Connection is examined in The Connection aka La French. Jean Dujardin stars as Pierre Michel, a relentlessly dedicated magistrate reassigned from Metz to the southern port city of Marseille, where Gaetan Zampa (Gilles Lelouche) a mafia mobster rules the city by controlling everyone, including the police force, by intimidation and blatantly practices his evil in broad daylight without being lawfully challenged. Michel thrusts into this sinister scenario by at first dispensing blank search warrants and arresting Zampa's junior henchmen for minor infractions that hopefully he will notice that someone is watching, but it barely rattles his cage. Before long Michel realises that to make a mark he will need to change his methods if he is to break this ruthless international drug syndicate. He decides to pitch criminal rivals against each other, one of these being Le Fou, Crazy Horse (Benoit Magimel). He is walking a blood-soaked path bordered by skeletons but Michel www.moviesbymills.com