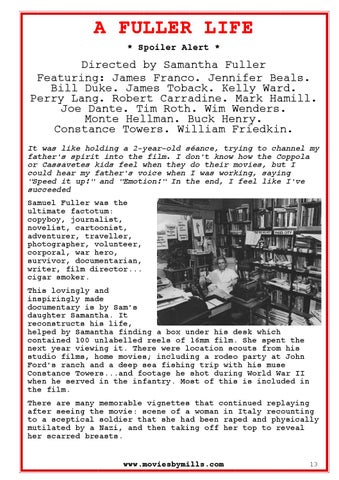 Directed by Samantha Fuller Featuring: James Franco. Jennifer Beals. Bill Duke. James Toback. Kelly Ward. Perry Lang. Robert Carradine. Mark Hamill. Joe Dante. Tim Roth. Wim Wenders. Monte Hellman. Buck Henry. Constance Towers. William Friedkin. It was like holding a 2-year-old sĂŠance, trying to channel my father&#39;s spirit into the film. I don&#39;t know how the Coppola or Cassavetes kids feel when they do their movies, but I could hear my father&#39;s voice when I was working, saying &quot;Speed it up!&quot; and &quot;Emotion!&quot; In the end, I feel like I&#39;ve succeeded Samuel Fuller was the ultimate factotum: copyboy, journalist, novelist, cartoonist, adventurer, traveller, photographer, volunteer, corporal, war hero, survivor, documentarian, writer, film director... cigar smoker. This lovingly and inspiringly made documentary is by Sam&#39;s daughter Samantha. It reconstructs his life, helped by Samantha finding a box under his desk which contained 100 unlabelled reels of 16mm film. She spent the next year viewing it. There were location scouts from his studio films, home movies; including a rodeo party at John Ford&#39;s ranch and a deep sea fishing trip with his muse Constance Towers...and footage he shot during World War II when he served in the infantry. Most of this is included in the film. There are many memorable vignettes that continued replaying after seeing the movie: scene of a woman in Italy recounting to a sceptical soldier that she had been raped and physically mutilated by a Nazi, and then taking off her top to reveal her scarred breasts.