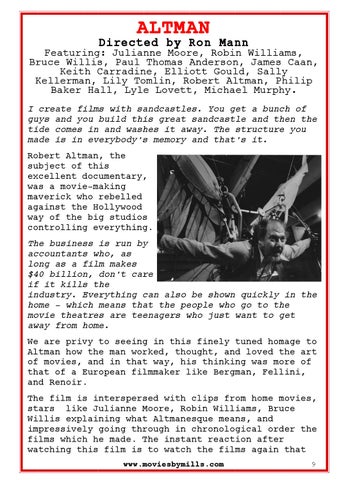 Featuring: Julianne Moore, Robin Williams, Bruce Willis, Paul Thomas Anderson, James Caan, Keith Carradine, Elliott Gould, Sally Kellerman, Lily Tomlin, Robert Altman, Philip Baker Hall, Lyle Lovett, Michael Murphy. I create films with sandcastles. You get a bunch of guys and you build this great sandcastle and then the tide comes in and washes it away. The structure you made is in everybody&#39;s memory and that&#39;s it. Robert Altman, the subject of this excellent documentary, was a movie-making maverick who rebelled against the Hollywood way of the big studios controlling everything. The business is run by accountants who, as long as a film makes $40 billion, don&#39;t care if it kills the industry. Everything can also be shown quickly in the home - which means that the people who go to the movie theatres are teenagers who just want to get away from home. We are privy to seeing in this finely tuned homage to Altman how the man worked, thought, and loved the art of movies, and in that way, his thinking was more of that of a European filmmaker like Bergman, Fellini, and Renoir. The film is interspersed with clips from home movies, stars like Julianne Moore, Robin Williams, Bruce Willis explaining what Altmanesque means, and impressively going through in chronological order the films which he made. The instant reaction after watching this film is to watch the films again that www.moviesbymills.com