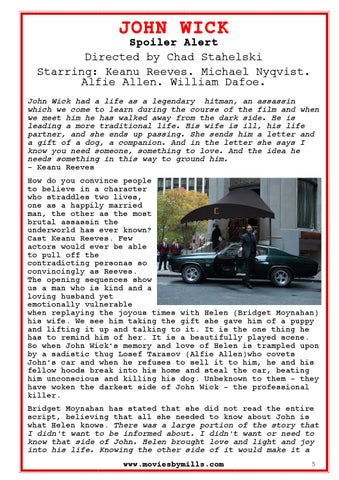 JOHN WICK Spoiler Alert Directed by Chad Stahelski Starring: Keanu Reeves. Michael Nyqvist. Alfie Allen. William Dafoe. John Wick had a life as a legendary hitman, an assassin which we come to learn during the course of the film and when we meet him he has walked away from the dark side. He is leading a more traditional life. His wife is ill, his life partner, and she ends up passing. She sends him a letter and a gift of a dog, a companion. And in the letter she says I know you need someone, something to love. And the idea he needs something in this way to ground him. - Keanu Reeves How do you convince people to believe in a character who straddles two lives, one as a happily married man, the other as the most brutal assassin the underworld has ever known? Cast Keanu Reeves. Few actors would ever be able to pull off the contradicting personas so convincingly as Reeves. The opening sequences show us a man who is kind and a loving husband yet emotionally vulnerable when replaying the joyous times with Helen (Bridget Moynahan) his wife. We see him taking the gift she gave him of a puppy and lifting it up and talking to it. It is the one thing he has to remind him of her. It is a beautifully played scene. So when John Wick&#39;s memory and love of Helen is trampled upon by a sadistic thug Losef Tarasov (Alfie Allen)who covets John&#39;s car and when he refuses to sell it to him, he and his fellow hoods break into his home and steal the car, beating him unconscious and killing his dog. Unbeknown to them - they have woken the darkest side of John Wick - the professional killer. Bridget Moynahan has stated that she did not read the entire script, believing that all she needed to know about John is what Helen knows. There was a large portion of the story that I didn&#39;t want to be informed about. I didn&#39;t want or need to know that side of John. Helen brought love and light and joy into his life. Knowing the other side of it would make it a www.moviesbymills.com