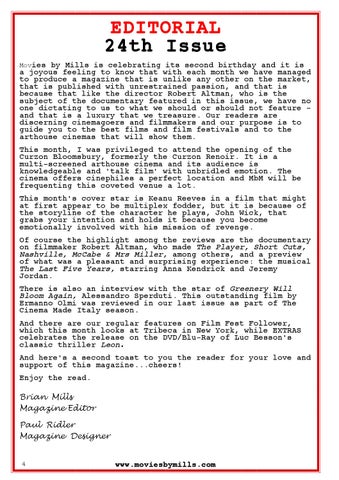 a joyous feeling to know that with each month we have managed to produce a magazine that is unlike any other on the market, that is published with unrestrained passion, and that is because that like the director Robert Altman, who is the subject of the documentary featured in this issue, we have no one dictating to us to what we should or should not feature and that is a luxury that we treasure. Our readers are discerning cinemagoers and filmmakers and our purpose is to guide you to the best films and film festivals and to the arthouse cinemas that will show them. This month, I was privileged to attend the opening of the Curzon Bloomsbury, formerly the Curzon Renoir. It is a multi-screened arthouse cinema and its audience is knowledgeable and &#39;talk film&#39; with unbridled emotion. The cinema offers cinephiles a perfect location and MbM will be frequenting this coveted venue a lot. This month&#39;s cover star is Keanu Reeves in a film that might at first appear to be multiplex fodder, but it is because of the storyline of the character he plays, John Wick, that grabs your intention and holds it because you become emotionally involved with his mission of revenge. Of course the highlight among the reviews are the documentary on filmmaker Robert Altman, who made The Player, Short Cuts, Nashville, McCabe &amp; Mrs Miller, among others, and a preview of what was a pleasant and surprising experience: the musical The Last Five Years, starring Anna Kendrick and Jeremy Jordan. There is also an interview with the star of Greenery Will Bloom Again, Alessandro Sperduti. This outstanding film by Ermanno Olmi was reviewed in our last issue as part of The Cinema Made Italy season. And there are our regular features on Film Fest Follower, which this month looks at Tribeca in New York, while EXTRAS celebrates the release on the DVD/Blu-Ray of Luc Besson&#39;s classic thriller Leon. And here&#39;s a second toast to you the reader for your love and support of this magazine...cheers! Enjoy the read. Brian Mills Magazine Editor Paul Ridler Magazine Designer