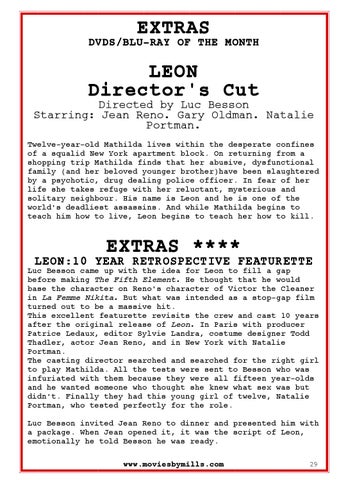 DVDS/BLU-RAY OF THE MONTH

Directed by Luc Besson Starring: Jean Reno. Gary Oldman. Natalie Portman. Twelve-year-old Mathilda lives within the desperate confines of a squalid New York apartment block. On returning from a shopping trip Mathilda finds that her abusive, dysfunctional family (and her beloved younger brother)have been slaughtered by a psychotic, drug dealing police officer. In fear of her life she takes refuge with her reluctant, mysterious and solitary neighbour. His name is Leon and he is one of the world&#39;s deadliest assassins. And while Mathilda begins to teach him how to live, Leon begins to teach her how to kill.

EXTRAS **** LEON:10 YEAR RETROSPECTIVE FEATURETTE Luc Besson came up with the idea for Leon to fill a gap before making The Fifth Element. He thought that he would base the character on Reno&#39;s character of Victor the Cleaner in La Femme Nikita. But what was intended as a stop-gap film turned out to be a massive hit. This excellent featurette revisits the crew and cast 10 years after the original release of Leon. In Paris with producer Patrice Ledaux, editor Sylvie Landra, costume designer Todd Thadler, actor Jean Reno, and in New York with Natalie Portman. The casting director searched and searched for the right girl to play Mathilda. All the tests were sent to Besson who was infuriated with them because they were all fifteen year-olds and he wanted someone who thought she knew what sex was but didn&#39;t. Finally they had this young girl of twelve, Natalie Portman, who tested perfectly for the role. Luc Besson invited Jean Reno to dinner and presented him with a package. When Jean opened it, it was the script of Leon, emotionally he told Besson he was ready. www.moviesbymills.com