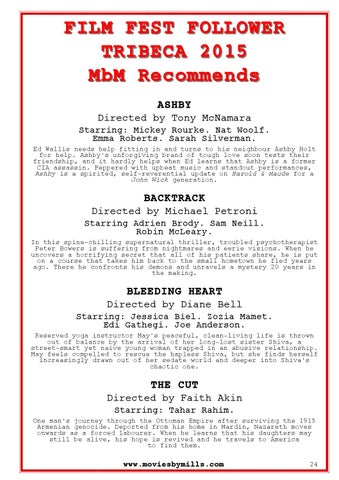 BACKTRACK Directed by Michael Petroni Starring Adrien Brody. Sam Neill. Robin McLeary. In this spine-chilling supernatural thriller, troubled psychotherapist Peter Bowers is suffering from nightmares and eerie visions. When he uncovers a horrifying secret that all of his patients share, he is put on a course that takes him back to the small hometown he fled years ago. There he confronts his demons and unravels a mystery 20 years in the making.

BLEEDING HEART Directed by Diane Bell Starring: Jessica Biel. Zozia Mamet. Edi Gathegi. Joe Anderson. Reserved yoga instructor May&#39;s peaceful, clean-living life is thrown out of balance by the arrival of her long-lost sister Shiva, a street-smart yet naive young woman trapped in an abusive relationship. May feels compelled to rescue the hapless Shiva, but she finds herself increasingly drawn out of her sedate world and deeper into Shiva&#39;s chaotic one.

THE CUT Directed by Faith Akin Starring: Tahar Rahim. One man&#39;s journey through the Ottoman Empire after surviving the 1915 Armenian genocide. Deported from his home in Mardin, Nazareth moves onwards as a forced labourer. When he learns that his daughters may still be alive, his hope is revived and he travels to America to find them.