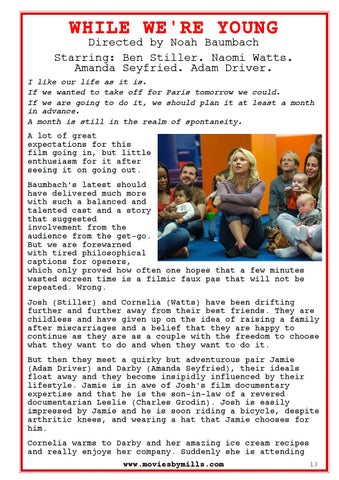 WHILE WE&#39;RE YOUNG Directed by Noah Baumbach Starring: Ben Stiller. Naomi Watts. Amanda Seyfried. Adam Driver. I like our life as it is. If we wanted to take off for Paris tomorrow we could. If we are going to do it, we should plan it at least a month in advance. A month is still in the realm of spontaneity.

A lot of great expectations for this film going in, but little enthusiasm for it after seeing it on going out. Baumbach&#39;s latest should have delivered much more with such a balanced and talented cast and a story that suggested involvement from the audience from the get-go. But we are forewarned with tired philosophical captions for openers, which only proved how often one hopes that a few minutes wasted screen time is a filmic faux pas that will not be repeated. Wrong. Josh (Stiller) and Cornelia (Watts) have been drifting further and further away from their best friends. They are childless and have given up on the idea of raising a family after miscarriages and a belief that they are happy to continue as they are as a couple with the freedom to choose what they want to do and when they want to do it. But then they meet a quirky but adventurous pair Jamie (Adam Driver) and Darby (Amanda Seyfried), their ideals float away and they become insipidly influenced by their lifestyle. Jamie is in awe of Josh&#39;s film documentary expertise and that he is the son-in-law of a revered documentarian Leslie (Charles Grodin). Josh is easily impressed by Jamie and he is soon riding a bicycle, despite arthritic knees, and wearing a hat that Jamie chooses for him. Cornelia warms to Darby and her amazing ice cream recipes and really enjoys her company. Suddenly she is attending www.moviesbymills.com