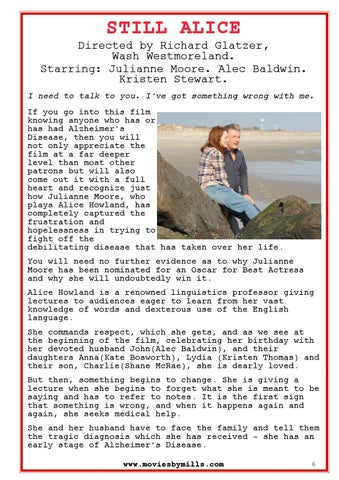 STILL ALICE Directed by Richard Glatzer, Wash Westmoreland. Starring: Julianne Moore. Alec Baldwin. Kristen Stewart. I need to talk to you. I've got something wrong with me. If you go into this film knowing anyone who has or has had Alzheimer's Disease, then you will not only appreciate the film at a far deeper level than most other patrons but will also come out it with a full heart and recognize just how Julianne Moore, who plays Alice Howland, has completely captured the frustration and hopelessness in trying to fight off the debilitating disease that has taken over her life. You will need no further evidence as to why Julianne Moore has been nominated for an Oscar for Best Actress and why she will undoubtedly win it. Alice Howland is a renowned linguistics professor giving lectures to audiences eager to learn from her vast knowledge of words and dexterous use of the English language. She commands respect, which she gets, and as we see at the beginning of the film, celebrating her birthday with her devoted husband John(Alec Baldwin), and their daughters Anna(Kate Bosworth), Lydia (Kristen Thomas) and their son, Charlie(Shane McRae), she is dearly loved. But then, something begins to change. She is giving a lecture when she begins to forget what she is meant to be saying and has to refer to notes. It is the first sign that something is wrong, and when it happens again and again, she seeks medical help. She and her husband have to face the family and tell them the tragic diagnosis which she has received - she has an early stage of Alzheimer's Disease. www.moviesbymills.com