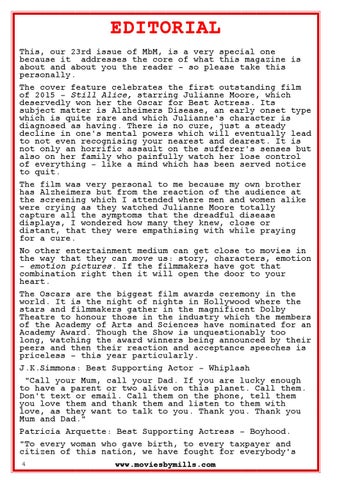 EDITORIAL This, our 23rd issue of MbM, is a very special one because it addresses the core of what this magazine is about and about you the reader - so please take this personally. The cover feature celebrates the first outstanding film of 2015 - Still Alice, starring Julianne Moore, which deservedly won her the Oscar for Best Actress. Its subject matter is Alzheimers Disease, an early onset type which is quite rare and which Julianne's character is diagnosed as having. There is no cure, just a steady decline in one's mental powers which will eventually lead to not even recognising your nearest and dearest. It is not only an horrific assault on the sufferer's senses but also on her family who painfully watch her lose control of everything - like a mind which has been served notice to quit. The film was very personal to me because my own brother has Alzheimers but from the reaction of the audience at the screening which I attended where men and women alike were crying as they watched Julianne Moore totally capture all the symptoms that the dreadful disease displays, I wondered how many they knew, close or distant, that they were empathising with while praying for a cure. No other entertainment medium can get close to movies in the way that they can move us: story, characters, emotion - emotion pictures. If the filmmakers have got that combination right then it will open the door to your heart. The Oscars are the biggest film awards ceremony in the world. It is the night of nights in Hollywood where the stars and filmmakers gather in the magnificent Dolby Theatre to honour those in the industry which the members of the Academy of Arts and Sciences have nominated for an Academy Award. Though the Show is unquestionably too long, watching the award winners being announced by their peers and then their reaction and acceptance speeches is priceless - this year particularly. J.K.Simmons: Best Supporting Actor - Whiplash "Call your Mum, call your Dad. If you are lucky enough to have a parent or two alive on this planet. Call them. Don't text or email. Call them on the phone, tell them you love them and thank them and listen to them with love, as they want to talk to you. Thank you. Thank you Mum and Dad." Patricia Arquette: Best Supporting Actress - Boyhood. "To every woman who gave birth, to every taxpayer and citizen of this nation, we have fought for everybody's 4