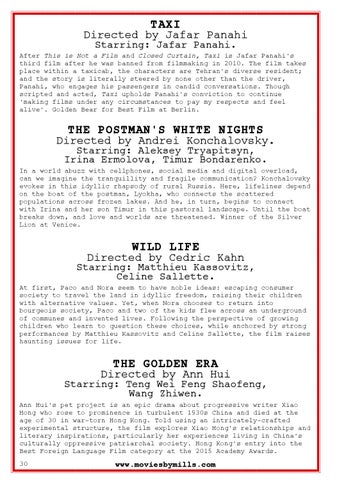 Directed by Jafar Panahi Starring: Jafar Panahi. After This is Not a Film and Closed Curtain, Taxi is Jafar Panahi's third film after he was banned from filmmaking in 2010. The film takes place within a taxicab, the characters are Tehran's diverse resident; and the story is literally steered by none other than the driver, Panahi, who engages his passengers in candid conversations. Though scripted and acted, Taxi upholds Panahi's conviction to continue 'making films under any circumstances to pay my respects and feel alive'. Golden Bear for Best Film at Berlin.

Directed by Andrei Konchalovsky. Starring: Aleksey Tryapitsyn, Irina Ermolova, Timur Bondarenko. In a world abuzz with cellphones, social media and digital overload, can we imagine the tranquillity and fragile communication? Konchalovsky evokes in this idyllic rhapsody of rural Russia. Here, lifelines depend on the boat of the postman, Lyokha, who connects the scattered populations across frozen lakes. And he, in turn, begins to connect with Irina and her son Timur in this pastoral landscape. Until the boat breaks down, and love and worlds are threatened. Winner of the Silver Lion at Venice.

Directed by Cedric Kahn Starring: Matthieu Kassovitz, Celine Sallette. At first, Paco and Nora seem to have noble ideas: escaping consumer society to travel the land in idyllic freedom, raising their children with alternative values. Yet, when Nora chooses to return into bourgeois society, Paco and two of the kids flee across an underground of communes and invented lives. Following the perspective of growing children who learn to question these choices, while anchored by strong performances by Matthieu Kassovitz and Celine Sallette, the film raises haunting issues for life.