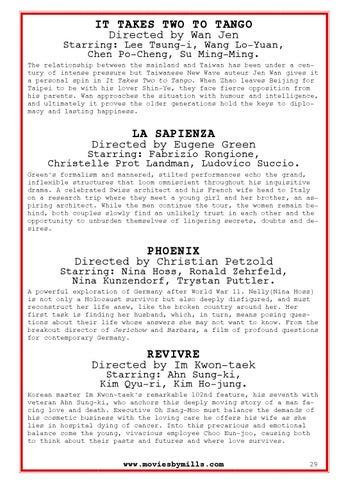 IT TAKES TWO TO TANGO Directed by Wan Jen

Starring: Lee Tsung-i, Wang Lo-Yuan, Chen Po-Cheng, Su Ming-Ming. The relationship between the mainland and Taiwan has been under a century of intense pressure but Taiwanese New Wave auteur Jen Wan gives it a personal spin in It Takes Two to Tango. When Zhao leaves Beijing for Taipei to be with his lover Shin-Ye, they face fierce opposition from his parents. Wan approaches the situation with humour and intelligence, and ultimately it proves the older generations hold the keys to diplomacy and lasting happiness.

Directed by Eugene Green Starring: Fabrizio Rongione, Christelle Prot Landman, Ludovico Succio. Green's formalism and mannered, stilted performances echo the grand, inflexible structures that loom omniscient throughout his inquisitive drama. A celebrated Swiss architect and his French wife head to Italy on a research trip where they meet a young girl and her brother, an aspiring architect. While the men continue the tour, the women remain behind, both couples slowly find an unlikely trust in each other and the opportunity to unburden themselves of lingering secrets, doubts and desires.

Directed by Christian Petzold Starring: Nina Hoss, Ronald Zehrfeld, Nina Kunzendorf, Trystan Puttler. A powerful exploration of Germany after World War 11. Nelly(Nina Hoss) is not only a Holocaust survivor but also deeply disfigured, and must reconstruct her life anew, like the broken country around her. Her first task is finding her husband, which, in turn, means posing questions about their life whose answers she may not want to know. From the breakout director of Jerichow and Barbara, a film of profound questions for contemporary Germany.

Directed by Im Kwon-taek Starring: Ahn Sung-ki, Kim Qyu-ri, Kim Ho-jung. Korean master Im Kwon-taek's remarkable 102nd feature, his seventh with veteran Ahn Sung-ki, who anchors this deeply moving story of a man facing love and death. Executive Oh Sang-Moo must balance the demands of his cosmetic business with the loving care he offers his wife as she lies in hospital dying of cancer. Into this precarious and emotional balance come the young, vivacious employee Choo Eun-joo, causing both to think about their pasts and futures and where love survives.