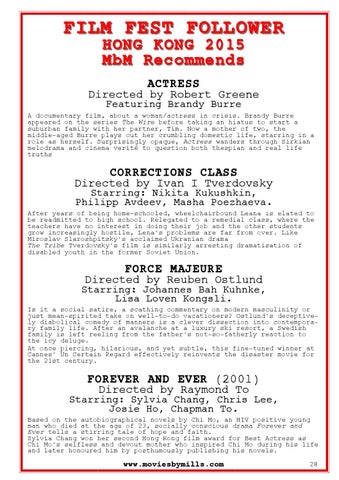 Directed by Robert Greene Featuring Brandy Burre A documentary film, about a woman/actress in crisis. Brandy Burre appeared on the series The Wire before taking an hiatus to start a suburban family with her partner, Tim. Now a mother of two, the middle-aged Burre plays out her crumbling domestic life, starring in a role as herself. Surprisingly opaque, Actress wanders through Sirkian melodrama and cinema veritĂŠ to question both thespian and real life truths

Directed by Ivan I Tverdovsky Starring: Nikita Kukushkin, Philipp Avdeev, Masha Poezhaeva. After years of being home-schooled, wheelchairbound Leana is elated to be readmitted to high school. Relegated to a remedial class, where the teachers have no interest in doing their job and the other students grow increasingly hostile, Lena's problems are far from over. Like Miroslav Slaroshpitsky's acclaimed Ukranian drama The Tribe Tverdovsky's film is similarly arresting dramatisation of disabled youth in the former Soviet Union.

Directed by Reuben Ostlund Starring: Johannes Bah Kuhnke, Lisa Loven Kongsli. Is it a social satire, a scathing commentary on modern masculinity or just mean-spirited take on well-to-do vacationers? Ostlund's deceptively diabolical comedy of manners is a clever dissection into contemporary family life. After an avalanche at a luxury ski resort, a Swedish family is left reeling from the father's not-so-fatherly reaction to the icy deluge. At once piercing, hilarious, and yet subtle, this fine-tuned winner at Cannes' Un Certain Regard effectively reinvents the disaster movie for the 21st century.

FOREVER AND EVER (2001) Directed by Raymond To

Starring: Sylvia Chang, Chris Lee, Josie Ho, Chapman To. Based on the autobiographical novels by Chi Mo, an HIV positive young man who died at the age of 23, socially conscious drama Forever and Ever tells a stirring tale of hope and faith. Sylvia Chang won her second Hong Kong film award for Best Actress as Chi Mo's selfless and devout mother who inspired Chi Mo during his life and later honoured him by posthumously publishing his novels.