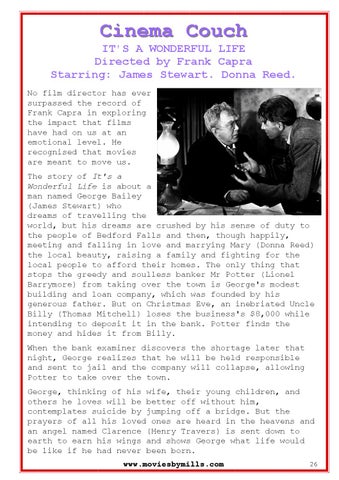 Cinema Couch IT'S A WONDERFUL LIFE Directed by Frank Capra Starring: James Stewart. Donna Reed. No film director has ever surpassed the record of Frank Capra in exploring the impact that films have had on us at an emotional level. He recognised that movies are meant to move us. The story of It's a Wonderful Life is about a man named George Bailey (James Stewart) who dreams of travelling the world, but his dreams are crushed by his sense of duty to the people of Bedford Falls and then, though happily, meeting and falling in love and marrying Mary (Donna Reed) the local beauty, raising a family and fighting for the local people to afford their homes. The only thing that stops the greedy and soulless banker Mr Potter (Lionel Barrymore) from taking over the town is George's modest building and loan company, which was founded by his generous father. But on Christmas Eve, an inebriated Uncle Billy (Thomas Mitchell) loses the business's $8,000 while intending to deposit it in the bank. Potter finds the money and hides it from Billy. When the bank examiner discovers the shortage later that night, George realizes that he will be held responsible and sent to jail and the company will collapse, allowing Potter to take over the town. George, thinking of his wife, their young children, and others he loves will be better off without him, contemplates suicide by jumping off a bridge. But the prayers of all his loved ones are heard in the heavens and an angel named Clarence (Henry Travers) is sent down to earth to earn his wings and shows George what life would be like if he had never been born. www.moviesbymills.com