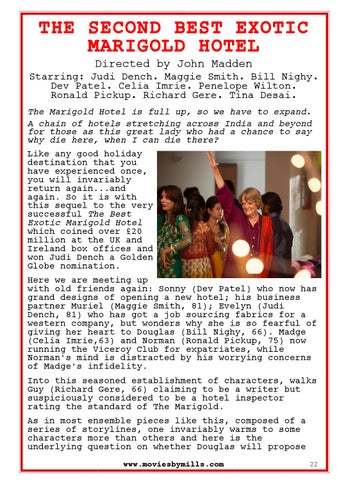 THE SECOND BEST EXOTIC MARIGOLD HOTEL Directed by John Madden Starring: Judi Dench. Maggie Smith. Bill Nighy. Dev Patel. Celia Imrie. Penelope Wilton. Ronald Pickup. Richard Gere. Tina Desai. The Marigold Hotel is full up, so we have to expand. A chain of hotels stretching across India and beyond for those as this great lady who had a chance to say why die here, when I can die there? Like any good holiday destination that you have experienced once, you will invariably return again...and again. So it is with this sequel to the very successful The Best Exotic Marigold Hotel which coined over ÂŁ20 million at the UK and Ireland box offices and won Judi Dench a Golden Globe nomination. Here we are meeting up with old friends again: Sonny (Dev Patel) who now has grand designs of opening a new hotel; his business partner Muriel (Maggie Smith, 81); Evelyn (Judi Dench, 81) who has got a job sourcing fabrics for a western company, but wonders why she is so fearful of giving her heart to Douglas (Bill Nighy, 66). Madge (Celia Imrie,63) and Norman (Ronald Pickup, 75) now running the Viceroy Club for expatriates, while Norman&#39;s mind is distracted by his worrying concerns of Madge&#39;s infidelity. Into this seasoned establishment of characters, walks Guy (Richard Gere, 66) claiming to be a writer but suspiciously considered to be a hotel inspector rating the standard of The Marigold. As in most ensemble pieces like this, composed of a series of storylines, one invariably warms to some characters more than others and here is the underlying question on whether Douglas will propose www.moviesbymills.com