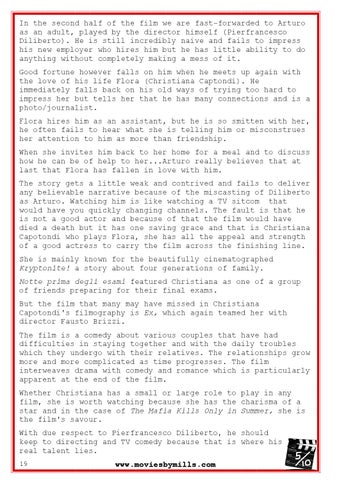 In the second half of the film we are fast-forwarded to Arturo as an adult, played by the director himself (Pierfrancesco Diliberto). He is still incredibly naive and fails to impress his new employer who hires him but he has little ability to do anything without completely making a mess of it. Good fortune however falls on him when he meets up again with the love of his life Flora (Christiana Captondi). He immediately falls back on his old ways of trying too hard to impress her but tells her that he has many connections and is a photo/journalist. Flora hires him as an assistant, but he is so smitten with her, he often fails to hear what she is telling him or misconstrues her attention to him as more than friendship. When she invites him back to her home for a meal and to discuss how he can be of help to her...Arturo really believes that at last that Flora has fallen in love with him. The story gets a little weak and contrived and fails to deliver any believable narrative because of the miscasting of Diliberto as Arturo. Watching him is like watching a TV sitcom that would have you quickly changing channels. The fault is that he is not a good actor and because of that the film would have died a death but it has one saving grace and that is Christiana Capotondi who plays Flora, she has all the appeal and strength of a good actress to carry the film across the finishing line. She is mainly known for the beautifully cinematographed Kryptonite! a story about four generations of family. Notte prima degli esami featured Christiana as one of a group of friends preparing for their final exams. But the film that many may have missed in Christiana Capotondi's filmography is Ex, which again teamed her with director Fausto Brizzi. The film is a comedy about various couples that have had difficulties in staying together and with the daily troubles which they undergo with their relatives. The relationships grow more and more complicated as time progresses. The film interweaves drama with comedy and romance which is particularly apparent at the end of the film. Whether Christiana has a small or large role to play in any film, she is worth watching because she has the charisma of a star and in the case of The Mafia Kills Only in Summer, she is the film's savour. With due respect to Pierfrancesco Diliberto, he should keep to directing and TV comedy because that is where his real talent lies. 19