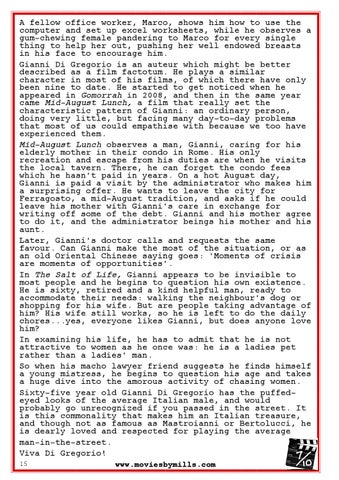 A fellow office worker, Marco, shows him how to use the computer and set up excel worksheets, while he observes a gum-chewing female pandering to Marco for every single thing to help her out, pushing her well endowed breasts in his face to encourage him. Gianni Di Gregorio is an auteur which might be better described as a film factotum. He plays a similar character in most of his films, of which there have only been nine to date. He started to get noticed when he appeared in Gomorrah in 2008, and then in the same year came Mid-August Lunch, a film that really set the characteristic pattern of Gianni: an ordinary person, doing very little, but facing many day-to-day problems that most of us could empathise with because we too have experienced them. Mid-August Lunch observes a man, Gianni, caring for his elderly mother in their condo in Rome. His only recreation and escape from his duties are when he visits the local tavern. There, he can forget the condo fees which he hasn't paid in years. On a hot August day, Gianni is paid a visit by the administrator who makes him a surprising offer. He wants to leave the city for Ferragosto, a mid-August tradition, and asks if he could leave his mother with Gianni's care in exchange for writing off some of the debt. Gianni and his mother agree to do it, and the administrator beings his mother and his aunt. Later, Gianni's doctor calls and requests the same favour. Can Gianni make the most of the situation, or as an old Oriental Chinese saying goes: 'Moments of crisis are moments of opportunities'. In The Salt of Life, Gianni appears to be invisible to most people and he begins to question his own existence. He is sixty, retired and a kind helpful man, ready to accommodate their needs: walking the neighbour's dog or shopping for his wife. But are people taking advantage of him? His wife still works, so he is left to do the daily chores...yes, everyone likes Gianni, but does anyone love him? In examining his life, he has to admit that he is not attractive to women as he once was: he is a ladies pet rather than a ladies' man. So when his macho lawyer friend suggests he finds himself a young mistress, he begins to question his age and takes a huge dive into the amorous activity of chasing women. Sixty-five year old Gianni Di Gregorio has the puffedeyed looks of the average Italian male, and would probably go unrecognized if you passed in the street. It is this commonality that makes him an Italian treasure, and though not as famous as Mastroianni or Bertolucci, he is dearly loved and respected for playing the average man-in-the-street. Viva Di Gregorio! 15