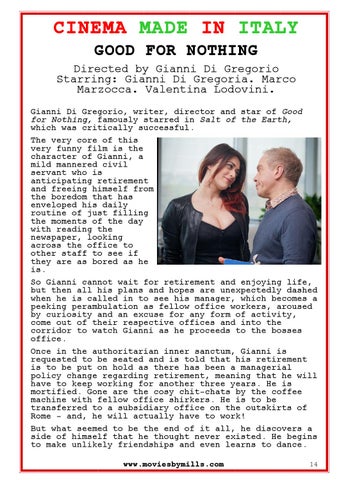 CINEMA MADE IN ITALY GOOD FOR NOTHING Directed by Gianni Di Gregorio Starring: Gianni Di Gregoria. Marco Marzocca. Valentina Lodovini. Gianni Di Gregorio, writer, director and star of Good for Nothing, famously starred in Salt of the Earth, which was critically successful. The very core of this very funny film is the character of Gianni, a mild mannered civil servant who is anticipating retirement and freeing himself from the boredom that has enveloped his daily routine of just filling the moments of the day with reading the newspaper, looking across the office to other staff to see if they are as bored as he is. So Gianni cannot wait for retirement and enjoying life, but then all his plans and hopes are unexpectedly dashed when he is called in to see his manager, which becomes a peeking perambulation as fellow office workers, aroused by curiosity and an excuse for any form of activity, come out of their respective offices and into the corridor to watch Gianni as he proceeds to the bosses office. Once in the authoritarian inner sanctum, Gianni is requested to be seated and is told that his retirement is to be put on hold as there has been a managerial policy change regarding retirement, meaning that he will have to keep working for another three years. He is mortified. Gone are the cosy chit-chats by the coffee machine with fellow office shirkers. He is to be transferred to a subsidiary office on the outskirts of Rome - and, he will actually have to work! But what seemed to be the end of it all, he discovers a side of himself that he thought never existed. He begins to make unlikely friendships and even learns to dance. www.moviesbymills.com