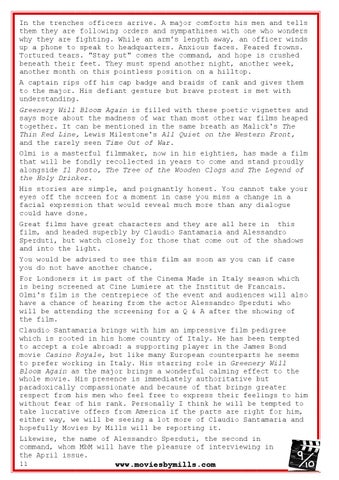 In the trenches officers arrive. A major comforts his men and tells them they are following orders and sympathises with one who wonders why they are fighting. While an arm's length away, an officer winds up a phone to speak to headquarters. Anxious faces. Feared frowns. Tortured tears. "Stay put" comes the command, and hope is crushed beneath their feet. They must spend another night, another week, another month on this pointless position on a hilltop. A captain rips off his cap badge and braids of rank and gives them to the major. His defiant gesture but brave protest is met with understanding. Greenery Will Bloom Again is filled with these poetic vignettes and says more about the madness of war than most other war films heaped together. It can be mentioned in the same breath as Malick's The Thin Red Line, Lewis Milestone's All Quiet on the Western Front, and the rarely seen Time Out of War. Olmi is a masterful filmmaker, now in his eighties, has made a film that will be fondly recollected in years to come and stand proudly alongside Il Posto, The Tree of the Wooden Clogs and The Legend of the Holy Drinker. His stories are simple, and poignantly honest. You cannot take your eyes off the screen for a moment in case you miss a change in a facial expression that would reveal much more than any dialogue could have done. Great films have great characters and they are all here in this film, and headed superbly by Claudio Santamaria and Alessandro Sperduti, but watch closely for those that come out of the shadows and into the light. You would be advised to see this film as soon as you can if case you do not have another chance. For Londoners it is part of the Cinema Made in Italy season which is being screened at Cine Lumiere at the Institut de Francais. Olmi's film is the centrepiece of the event and audiences will also have a chance of hearing from the actor Alessandro Sperduti who will be attending the screening for a Q & A after the showing of the film. Claudio Santamaria brings with him an impressive film pedigree which is rooted in his home country of Italy. He has been tempted to accept a role abroad: a supporting player in the James Bond movie Casino Royale, but like many European counterparts he seems to prefer working in Italy. His starring role in Greenery Will Bloom Again as the major brings a wonderful calming effect to the whole movie. His presence is immediately authoritative but paradoxically compassionate and because of that brings greater respect from his men who feel free to express their feelings to him without fear of his rank. Personally I think he will be tempted to take lucrative offers from America if the parts are right for him, either way, we will be seeing a lot more of Claudio Santamaria and hopefully Movies by Mills will be reporting it. Likewise, the name of Alessandro Sperduti, the second in command, whom MbM will have the pleasure of interviewing in the April issue. 11 www.moviesbymills.com