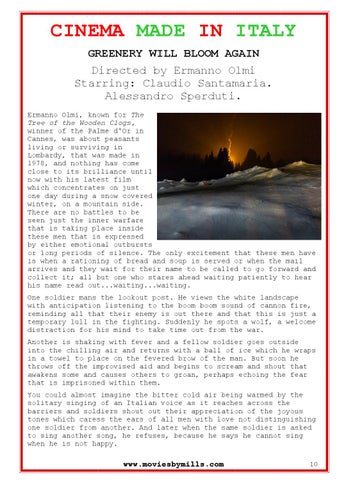 CINEMA MADE IN ITALY GREENERY WILL BLOOM AGAIN Directed by Ermanno Olmi Starring: Claudio Santamaria. Alessandro Sperduti. Ermanno Olmi, known for The Tree of the Wooden Clogs, winner of the Palme d&#39;Or in Cannes, was about peasants living or surviving in Lombardy, that was made in 1978, and nothing has come close to its brilliance until now with his latest film which concentrates on just one day during a snow covered winter, on a mountain side. There are no battles to be seen just the inner warfare that is taking place inside these men that is expressed by either emotional outbursts or long periods of silence. The only excitement that these men have is when a rationing of bread and soup is served or when the mail arrives and they wait for their name to be called to go forward and collect it; all but one who stares ahead waiting patiently to hear his name read out...waiting...waiting. One soldier mans the lookout post. He views the white landscape with anticipation listening to the boom boom sound of cannon fire, reminding all that their enemy is out there and that this is just a temporary lull in the fighting. Suddenly he spots a wolf, a welcome distraction for his mind to take time out from the war. Another is shaking with fever and a fellow soldier goes outside into the chilling air and returns with a ball of ice which he wraps in a towel to place on the fevered brow of the man. But soon he throws off the improvised aid and begins to scream and shout that awakens some and causes others to groan, perhaps echoing the fear that is imprisoned within them. You could almost imagine the bitter cold air being warmed by the solitary singing of an Italian voice as it reaches across the barriers and soldiers shout out their appreciation of the joyous tones which caress the ears of all men with love not distinguishing one soldier from another. And later when the same soldier is asked to sing another song, he refuses, because he says he cannot sing when he is not happy.