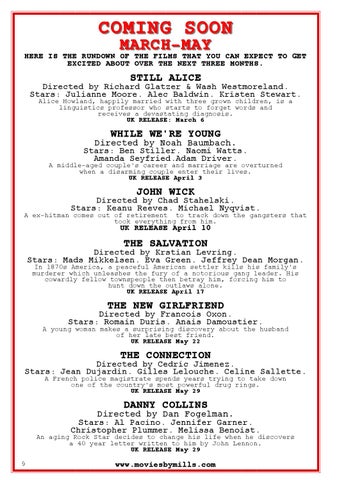 MARCHâ&#x20AC;&#x201C;MAY HERE IS THE RUNDOWN OF THE FILMS THAT YOU CAN EXPECT TO GET EXCITED ABOUT OVER THE NEXT THREE MONTHS.

JOHN WICK Directed by Chad Stahelski. Stars: Keanu Reeves. Michael Nyqvist. A ex-hitman comes out of retirement to track down the gangsters that took everything from him.

Directed by Krstian Levring. Stars: Mads Mikkelsen. Eva Green. Jeffrey Dean Morgan. In 1870s America, a peaceful American settler kills his family's murderer which unleashes the fury of a notorious gang leader. His cowardly fellow townspeople then betray him, forcing him to hunt down the outlaws alone. UK RELEASE April 17

THE NEW GIRLFRIEND Directed by Francois Oxon. Stars: Romain Duris. Anais Damoustier. A young woman makes a surprising discovery about the husband of her late best friend. UK RELEASE May 22