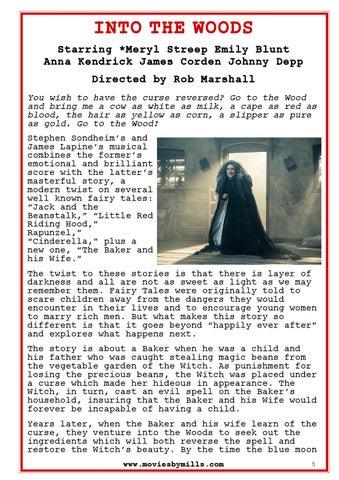 INTO THE WOODS Starring *Meryl Streep Emily Blunt Anna Kendrick James Corden Johnny Depp Directed by Rob Marshall You wish to have the curse reversed? Go to the Wood and bring me a cow as white as milk, a cape as red as blood, the hair as yellow as corn, a slipper as pure as gold. Go to the Wood! Stephen Sondheim’s and James Lapine’s musical combines the former’s emotional and brilliant score with the latter’s masterful story, a modern twist on several well known fairy tales: “Jack and the Beanstalk,” “Little Red Riding Hood,” Rapunzel,” “Cinderella,” plus a new one, “The Baker and his Wife.” The twist to these stories is that there is layer of darkness and all are not as sweet as light as we may remember them. Fairy Tales were originally told to scare children away from the dangers they would encounter in their lives and to encourage young women to marry rich men. But what makes this story so different is that it goes beyond “happily ever after” and explores what happens next. The story is about a Baker when he was a child and his father who was caught stealing magic beans from the vegetable garden of the Witch. As punishment for losing the precious beans, the Witch was placed under a curse which made her hideous in appearance. The Witch, in turn, cast an evil spell on the Baker’s household, insuring that the Baker and his Wife would forever be incapable of having a child. Years later, when the Baker and his wife learn of the curse, they venture into the Woods to seek out the ingredients which will both reverse the spell and restore the Witch’s beauty. By the time the blue moon www.moviesbymills.com