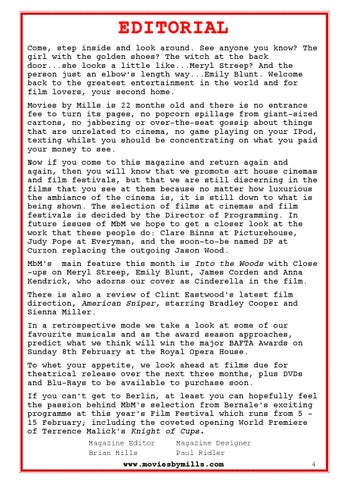 EDITORIAL Come, step inside and look around. See anyone you know? The girl with the golden shoes? The witch at the back door...she looks a little like...Meryl Streep? And the person just an elbow's length way...Emily Blunt. Welcome back to the greatest entertainment in the world and for film lovers, your second home. Movies by Mills is 22 months old and there is no entrance fee to turn its pages, no popcorn spillage from giant-sized cartons, no jabbering or over-the-seat gossip about things that are unrelated to cinema, no game playing on your IPod, texting whilst you should be concentrating on what you paid your money to see. Now if you come to this magazine and return again and again, then you will know that we promote art house cinemas and film festivals, but that we are still discerning in the films that you see at them because no matter how luxurious the ambiance of the cinema is, it is still down to what is being shown. The selection of films at cinemas and film festivals is decided by the Director of Programming. In future issues of MbM we hope to get a closer look at the work that these people do: Clare Binns at Picturehouse, Judy Pope at Everyman, and the soon-to-be named DP at Curzon replacing the outgoing Jason Wood. MbM's main feature this month is Into the Woods with Close -ups on Meryl Streep, Emily Blunt, James Corden and Anna Kendrick, who adorns our cover as Cinderella in the film. There is also a review of Clint Eastwood's latest film direction, American Sniper, starring Bradley Cooper and Sienna Miller. In a retrospective mode we take a look at some of our favourite musicals and as the award season approaches, predict what we think will win the major BAFTA Awards on Sunday 8th February at the Royal Opera House. To whet your appetite, we look ahead at films due for theatrical release over the next three months, plus DVDs and Blu-Rays to be available to purchase soon. If you can't get to Berlin, at least you can hopefully feel the passion behind MbM's selection from Bernale's exciting programme at this year's Film Festival which runs from 5 15 February; including the coveted opening World Premiere of Terrence Malick's Knight of Cups. Magazine Editor Brian Mills