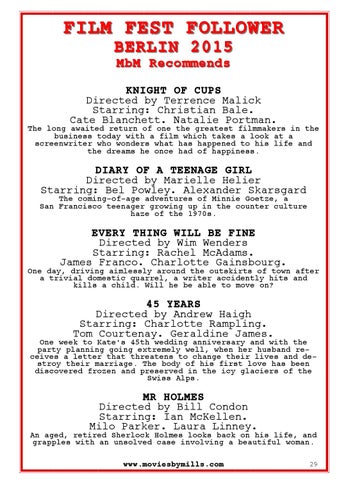 Directed by Terrence Malick Starring: Christian Bale. Cate Blanchett. Natalie Portman. The long awaited return of one the greatest filmmakers in the business today with a film which takes a look at a screenwriter who wonders what has happened to his life and the dreams he once had of happiness.

DIARY OF A TEENAGE GIRL Directed by Marielle Helier Starring: Bel Powley. Alexander Skarsgard The coming-of-age adventures of Minnie Goetze, a San Francisco teenager growing up in the counter culture haze of the 1970s.

EVERY THING WILL BE FINE

One day, driving aimlessly around the outskirts of town after a trivial domestic quarrel, a writer accidently hits and kills a child. Will he be able to move on?

One week to Kate's 45th wedding anniversary and with the party planning going extremely well, when her husband receives a letter that threatens to change their lives and destroy their marriage. The body of his first love has been discovered frozen and preserved in the icy glaciers of the Swiss Alps.

An aged, retired Sherlock Holmes looks back on his life, and grapples with an unsolved case involving a beautiful woman. www.moviesbymills.com