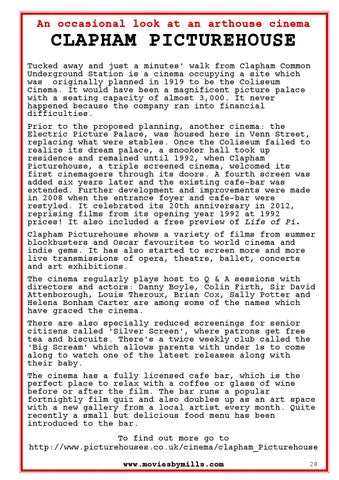 An occasional look at an arthouse cinema

CLAPHAM PICTUREHOUSE Tucked away and just a minutes' walk from Clapham Common Underground Station is a cinema occupying a site which was originally planned in 1919 to be the Coliseum Cinema. It would have been a magnificent picture palace with a seating capacity of almost 3,000. It never happened because the company ran into financial difficulties. Prior to the proposed planning, another cinema: the Electric Picture Palace, was housed here in Venn Street, replacing what were stables. Once the Coliseum failed to realize its dream palace, a snooker hall took up residence and remained until 1992, when Clapham Picturehouse, a triple screened cinema, welcomed its first cinemagoers through its doors. A fourth screen was added six years later and the existing cafe-bar was extended. Further development and improvements were made in 2008 when the entrance foyer and cafe-bar were restyled. It celebrated its 20th anniversary in 2012, reprising films from its opening year 1992 at 1992 prices! It also included a free preview of Life of Pi. Clapham Picturehouse shows a variety of films from summer blockbusters and Oscar favourites to world cinema and indie gems. It has also started to screen more and more live transmissions of opera, theatre, ballet, concerts and art exhibitions. The cinema regularly plays host to Q & A sessions with directors and actors: Danny Boyle, Colin Firth, Sir David Attenborough, Louis Theroux, Brian Cox, Sally Potter and Helena Bonham Carter are among some of the names which have graced the cinema. There are also specially reduced screenings for senior citizens called 'Silver Screen', where patrons get free tea and biscuits. There's a twice weekly club called the 'Big Scream' which allows parents with under 1s to come along to watch one of the latest releases along with their baby. The cinema has a fully licensed cafe bar, which is the perfect place to relax with a coffee or glass of wine before or after the film. The bar runs a popular fortnightly film quiz and also doubles up as an art space with a new gallery from a local artist every month. Quite recently a small but delicious food menu has been introduced to the bar. To find out more go to http://www.picturehouses.co.uk/cinema/clapham_Picturehouse www.moviesbymills.com