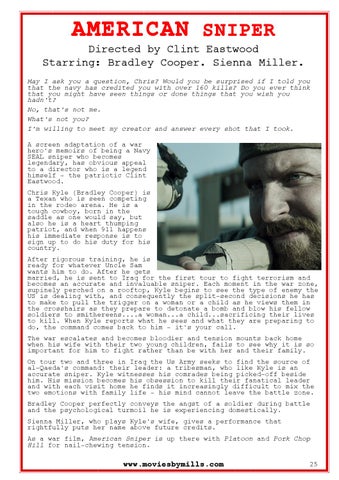 AMERICAN SNIPER Directed by Clint Eastwood Starring: Bradley Cooper. Sienna Miller. May I ask you a question, Chris? Would you be surprised if I told you that the navy has credited you with over 160 kills? Do you ever think that you might have seen things or done things that you wish you hadn't? No, that's not me. What's not you? I'm willing to meet my creator and answer every shot that I took. A screen adaptation of a war hero's memoirs of being a Navy SEAL sniper who becomes legendary, has obvious appeal to a director who is a legend himself - the patriotic Clint Eastwood. Chris Kyle (Bradley Cooper) is a Texan who is seen competing in the rodeo arena. He is a tough cowboy, born in the saddle as one would say, but also he is a heart thumping patriot, and when 911 happens his immediate response is to sign up to do his duty for his country. After rigorous training, he is ready for whatever Uncle Sam wants him to do. After he gets married, he is sent to Iraq for the first tour to fight terrorism and becomes an accurate and invaluable sniper. Each moment in the war zone, supinely perched on a rooftop, Kyle begins to see the type of enemy the US is dealing with, and consequently the split-second decisions he has to make to pull the trigger on a woman or a child as he views them in the crosshairs as they prepare to detonate a bomb and blow his fellow soldiers to smithereens....a woman...a child...sacrificing their lives to kill. When Kyle reports what he sees and what they are preparing to do, the command comes back to him - it's your call. The war escalates and becomes bloodier and tension mounts back home when his wife with their two young children, fails to see why it is so important for him to fight rather than be with her and their family. On tour two and three in Iraq the Us Army seeks to find the source of al-Qaeda's command: their leader: a tribesman, who like Kyle is an accurate sniper. Kyle witnesses his comrades being picked-off beside him. His mission becomes his obsession to kill their fanatical leader and with each visit home he finds it increasingly difficult to mix the two emotions with family life - his mind cannot leave the battle zone. Bradley Cooper perfectly conveys the angst of a soldier during battle and the psychological turmoil he is experiencing domestically. Sienna Miller, who plays Kyle's wife, gives a performance that rightfully puts her name above future credits. As a war film, American Sniper is up there with Platoon and Pork Chop Hill for nail-chewing tension.