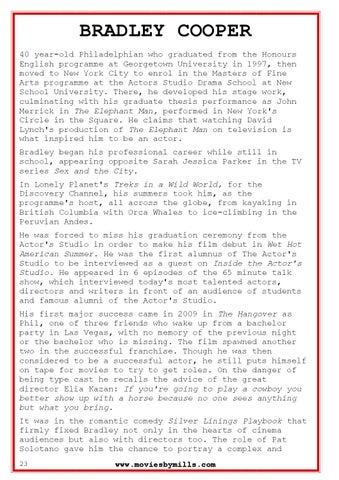 BRADLEY COOPER 40 year-old Philadelphian who graduated from the Honours English programme at Georgetown University in 1997, then moved to New York City to enrol in the Masters of Fine Arts programme at the Actors Studio Drama School at New School University. There, he developed his stage work, culminating with his graduate thesis performance as John Merrick in The Elephant Man, performed in New York's Circle in the Square. He claims that watching David Lynch's production of The Elephant Man on television is what inspired him to be an actor. Bradley began his professional career while still in school, appearing opposite Sarah Jessica Parker in the TV series Sex and the City. In Lonely Planet's Treks in a Wild World, for the Discovery Channel, his summers took him, as the programme's host, all across the globe, from kayaking in British Columbia with Orca Whales to ice-climbing in the Peruvian Andes. He was forced to miss his graduation ceremony from the Actor's Studio in order to make his film debut in Wet Hot American Summer. He was the first alumnus of The Actor's Studio to be interviewed as a guest on Inside the Actor's Studio. He appeared in 6 episodes of the 65 minute talk show, which interviewed today's most talented actors, directors and writers in front of an audience of students and famous alumni of the Actor's Studio. His first major success came in 2009 in The Hangover as Phil, one of three friends who wake up from a bachelor party in Las Vegas, with no memory of the previous night or the bachelor who is missing. The film spawned another two in the successful franchise. Though he was then considered to be a successful actor, he still puts himself on tape for movies to try to get roles. On the danger of being type cast he recalls the advice of the great director Elia Kazan: If you're going to play a cowboy you better show up with a horse because no one sees anything but what you bring. It was in the romantic comedy Silver Linings Playbook that firmly fixed Bradley not only in the hearts of cinema audiences but also with directors too. The role of Pat Solotano gave him the chance to portray a complex and 23