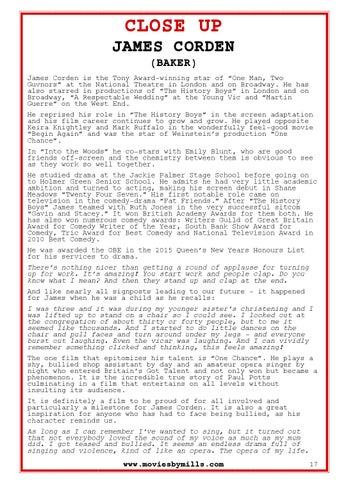 CLOSE UP JAMES CORDEN (BAKER) James Corden is the Tony Award-winning star of “One Man, Two Guvnors” at the National Theatre in London and on Broadway. He has also starred in productions of “The History Boys” in London and on Broadway, “A Respectable Wedding” at the Young Vic and “Martin Guerre” on the West End. He reprised his role in “The History Boys” in the screen adaptation and his film career continues to grow and grow. He played opposite Keira Knightley and Mark Ruffalo in the wonderfully feel-good movie “Begin Again” and was the star of Weinstein’s production “One Chance”. In “Into the Woods” he co-stars with Emily Blunt, who are good friends off-screen and the chemistry between them is obvious to see as they work so well together. He studied drama at the Jackie Palmer Stage School before going on to Holmer Green Senior School. He admits he had very little academic ambition and turned to acting, making his screen debut in Shane Meadows “Twenty Four Seven.” His first notable role came on television in the comedy-drama “Fat Friends.” After “The History Boys” James teamed with Ruth Jones in the very successful sitcom “Gavin and Stacey.” It won British Academy Awards for them both. He has also won numerous comedy awards: Writers Guild of Great Britain Award for Comedy Writer of the Year, South Bank Show Award for Comedy, Tric Award for Best Comedy and National Television Award in 2010 Best Comedy. He was awarded the OBE in the 2015 Queen’s New Years Honours List for his services to drama. There’s nothing nicer than getting a round of applause for turning up for work. It’s amazing! You start work and people clap. Do you know what I mean? And then they stand up and clap at the end. And like nearly all signposts leading to our future – it happened for James when he was a child as he recalls: I was three and it was during my younger sister’s christening and I was lifted up to stand on a chair so I could see. I looked out at the congregation of about thirty or forty people, but to me it seemed like thousands. And I started to do little dances on the chair and pull faces and turn around under my legs - and everyone burst out laughing. Even the vicar was laughing. And I can vividly remember something clicked and thinking, this feels amazing! The one film that epitomizes his talent is “One Chance”. He plays a shy, bullied shop assistant by day and an amateur opera singer by night who entered Britain’s Got Talent and not only won but became a phenomenon. It is the incredible true story of Paul Potts culminating in a film that entertains on all levels without insulting its audience. It is definitely a film to be proud of for all involved and particularly a milestone for James Corden. It is also a great inspiration for anyone who has had to face being bullied, as his character reminds us. As long as I can remember I’ve wanted to sing, but it turned out that not everybody loved the sound of my voice as much as my mum did. I got teased and bullied. It seems an endless drama full of singing and violence, kind of like an opera. The opera of my life.