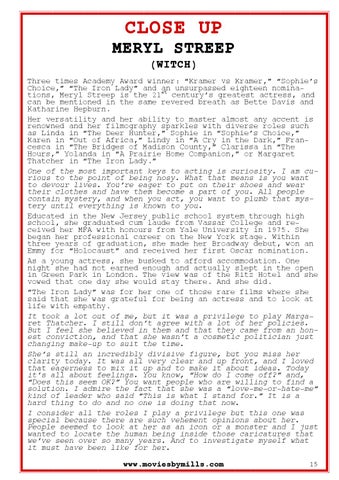 CLOSE UP MERYL STREEP (WITCH) Three times Academy Award winner: “Kramer vs Kramer,” “Sophie’s Choice,” “The Iron Lady” and st an unsurpassed eighteen nominations, Meryl Streep is the 21 century’s greatest actress, and can be mentioned in the same revered breath as Bette Davis and Katharine Hepburn. Her versatility and her ability to master almost any accent is renowned and her filmography sparkles with diverse roles such as Linda in “The Deer Hunter,” Sophie in “Sophie’s Choice,” Karen in “Out of Africa,” Lindy in “A Cry in the Dark,” Francesca in “The Bridges of Madison County,” Clarissa in “The Hours,” Yolanda in “A Prairie Home Companion,” or Margaret Thatcher in “The Iron Lady.” One of the most important keys to acting is curiosity. I am curious to the point of being nosy. What that means is you want to devour lives. You’re eager to put on their shoes and wear their clothes and have them become a part of you. All people contain mystery, and when you act, you want to plumb that mystery until everything is known to you. Educated in the New Jersey public school system through high school, she graduated cum laude from Vassar College and received her MFA with honours from Yale University in 1975. She began her professional career on the New York stage. Within three years of graduation, she made her Broadway debut, won an Emmy for “Holocaust” and received her first Oscar nomination. As a young actress, she busked to afford accommodation. One night she had not earned enough and actually slept in the open in Green Park in London. The view was of the Ritz Hotel and she vowed that one day she would stay there. And she did. “The Iron Lady” was for her one of those rare films where she said that she was grateful for being an actress and to look at life with empathy. It took a lot out of me, but it was a privilege to play Margaret Thatcher. I still don’t agree with a lot of her policies. But I feel she believed in them and that they came from an honest conviction, and that she wasn’t a cosmetic politician just changing make-up to suit the time. She’s still an incredibly divisive figure, but you miss her clarity today. It was all very clear and up front, and I loved that eagerness to mix it up and to make it about ideas. Today it’s all about feelings. You know, “How do I come off?” and, “Does this seem OK?” You want people who are willing to find a solution. I admire the fact that she was a “love-me-or-hate-me” kind of leader who said “This is what I stand for.” It is a hard thing to do and no one is doing that now. I consider all the roles I play a privilege but this one was special because there are such vehement opinions about her. People seemed to look at her as an icon or a monster and I just wanted to locate the human being inside those caricatures that we’ve seen over so many years. And to investigate myself what it must have been like for her.