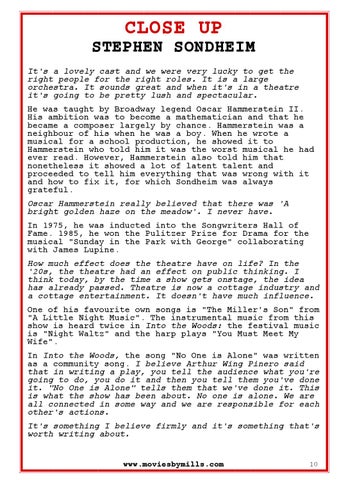 CLOSE UP STEPHEN SONDHEIM It's a lovely cast and we were very lucky to get the right people for the right roles. It is a large orchestra. It sounds great and when it's in a theatre it's going to be pretty lush and spectacular. He was taught by Broadway legend Oscar Hammerstein II. His ambition was to become a mathematician and that he became a composer largely by chance. Hammerstein was a neighbour of his when he was a boy. When he wrote a musical for a school production, he showed it to Hammerstein who told him it was the worst musical he had ever read. However, Hammerstein also told him that nonetheless it showed a lot of latent talent and proceeded to tell him everything that was wrong with it and how to fix it, for which Sondheim was always grateful. Oscar Hammerstein really believed that there was 'A bright golden haze on the meadow'. I never have. In 1975, he was inducted into the Songwriters Hall of Fame. 1985, he won the Pulitzer Prize for Drama for the musical "Sunday in the Park with George" collaborating with James Lupine. How much effect does the theatre have on life? In the '20s, the theatre had an effect on public thinking. I think today, by the time a show gets onstage, the idea has already passed. Theatre is now a cottage industry and a cottage entertainment. It doesn't have much influence. One of his favourite own songs is "The Miller's Son" from "A Little Night Music". The instrumental music from this show is heard twice in Into the Woods: the festival music is "Night Waltz" and the harp plays "You Must Meet My Wife". In Into the Woods, the song "No One is Alone" was written as a community song. I believe Arthur Wing Pinero said that in writing a play, you tell the audience what you're going to do, you do it and then you tell them you've done it. "No One is Alone" tells them that we've done it. This is what the show has been about. No one is alone. We are all connected in some way and we are responsible for each other's actions. It's something I believe firmly and it's something that's worth writing about.