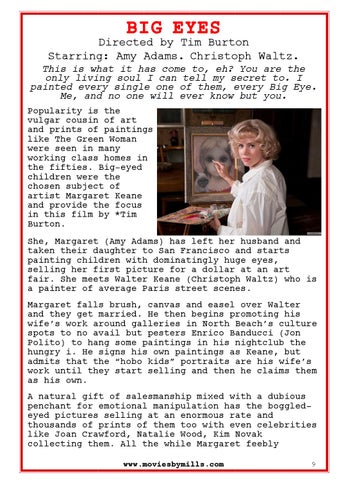 BIG EYES Directed by Tim Burton Starring: Amy Adams. Christoph Waltz. This is what it has come to, eh? You are the only living soul I can tell my secret to. I painted every single one of them, every Big Eye. Me, and no one will ever know but you. Popularity is the vulgar cousin of art and prints of paintings like The Green Woman were seen in many working class homes in the fifties. Big-eyed children were the chosen subject of artist Margaret Keane and provide the focus in this film by *Tim Burton. She, Margaret (Amy Adams) has left her husband and taken their daughter to San Francisco and starts painting children with dominatingly huge eyes, selling her first picture for a dollar at an art fair. She meets Walter Keane (Christoph Waltz) who is a painter of average Paris street scenes. Margaret falls brush, canvas and easel over Walter and they get married. He then begins promoting his wife’s work around galleries in North Beach’s culture spots to no avail but pesters Enrico Banducci (Jon Polito) to hang some paintings in his nightclub the hungry i. He signs his own paintings as Keane, but admits that the “hobo kids” portraits are his wife’s work until they start selling and then he claims them as his own. A natural gift of salesmanship mixed with a dubious penchant for emotional manipulation has the boggledeyed pictures selling at an enormous rate and thousands of prints of them too with even celebrities like Joan Crawford, Natalie Wood, Kim Novak collecting them. All the while Margaret feebly www.moviesbymills.com