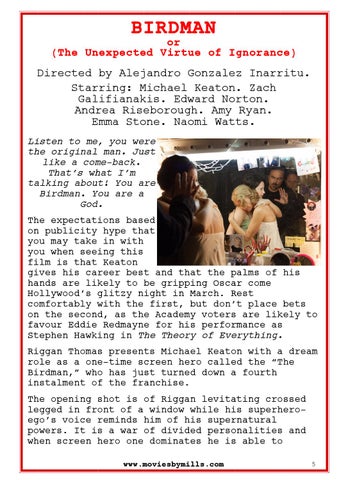 or (The Unexpected Virtue of Ignorance) Directed by Alejandro Gonzalez Inarritu. Starring: Michael Keaton. Zach Galifianakis. Edward Norton. Andrea Riseborough. Amy Ryan. Emma Stone. Naomi Watts. Listen to me, you were the original man. Just like a come-back. That’s what I’m talking about! You are Birdman. You are a God. The expectations based on publicity hype that you may take in with you when seeing this film is that Keaton gives his career best and that the palms of his hands are likely to be gripping Oscar come Hollywood’s glitzy night in March. Rest comfortably with the first, but don’t place bets on the second, as the Academy voters are likely to favour Eddie Redmayne for his performance as Stephen Hawking in The Theory of Everything. Riggan Thomas presents Michael Keaton with a dream role as a one-time screen hero called the “The Birdman,” who has just turned down a fourth instalment of the franchise. The opening shot is of Riggan levitating crossed legged in front of a window while his superheroego’s voice reminds him of his supernatural powers. It is a war of divided personalities and when screen hero one dominates he is able to www.moviesbymills.com