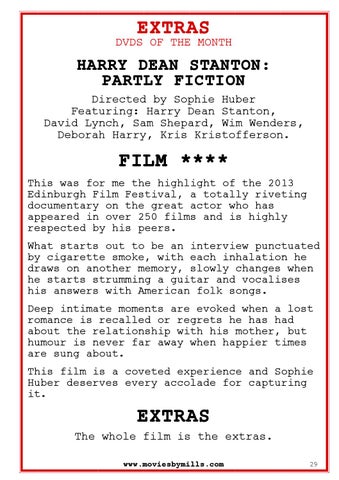 DVDS OF THE MONTH

FILM **** This was for me the highlight of the 2013 Edinburgh Film Festival, a totally riveting documentary on the great actor who has appeared in over 250 films and is highly respected by his peers. What starts out to be an interview punctuated by cigarette smoke, with each inhalation he draws on another memory, slowly changes when he starts strumming a guitar and vocalises his answers with American folk songs. Deep intimate moments are evoked when a lost romance is recalled or regrets he has had about the relationship with his mother, but humour is never far away when happier times are sung about. This film is a coveted experience and Sophie Huber deserves every accolade for capturing it.

EXTRAS The whole film is the extras. www.moviesbymills.com