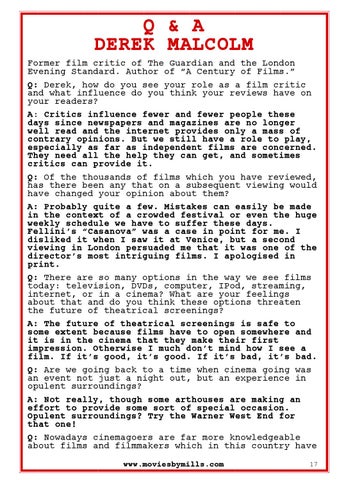 Q &amp; A DEREK MALCOLM Former film critic of The Guardian and the London Evening Standard. Author of “A Century of Films.” Q: Derek, how do you see your role as a film critic and what influence do you think your reviews have on your readers? A: Critics influence fewer and fewer people these days since newspapers and magazines are no longer well read and the internet provides only a mass of contrary opinions. But we still have a role to play, especially as far as independent films are concerned. They need all the help they can get, and sometimes critics can provide it. Q: Of the thousands of films which you have reviewed, has there been any that on a subsequent viewing would have changed your opinion about them? A: Probably quite a few. Mistakes can easily be made in the context of a crowded festival or even the huge weekly schedule we have to suffer these days. Fellini’s “Casanova” was a case in point for me. I disliked it when I saw it at Venice, but a second viewing in London persuaded me that it was one of the director’s most intriguing films. I apologised in print. Q: There are so many options in the way we see films today: television, DVDs, computer, IPod, streaming, internet, or in a cinema? What are your feelings about that and do you think these options threaten the future of theatrical screenings? A: The future of theatrical screenings is safe to some extent because films have to open somewhere and it is in the cinema that they make their first impression. Otherwise I much don’t mind how I see a film. If it’s good, it’s good. If it’s bad, it’s bad. Q: Are we going back to a time when cinema going was an event not just a night out, but an experience in opulent surroundings? A: Not really, though some arthouses are making an effort to provide some sort of special occasion. Opulent surroundings? Try the Warner West End for that one! Q: Nowadays cinemagoers are far more knowledgeable about films and filmmakers which in this country have www.moviesbymills.com