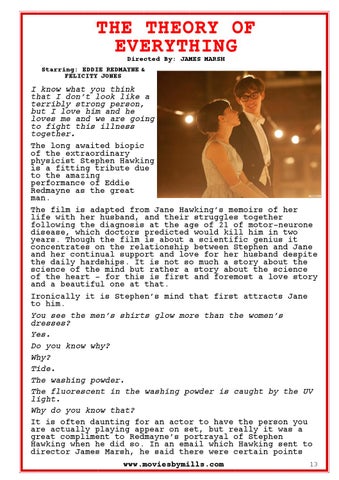 I know what you think that I don’t look like a terribly strong person, but I love him and he loves me and we are going to fight this illness together. The long awaited biopic of the extraordinary physicist Stephen Hawking is a fitting tribute due to the amazing performance of Eddie Redmayne as the great man. The film is adapted from Jane Hawking’s memoirs of her life with her husband, and their struggles together following the diagnosis at the age of 21 of motor-neurone disease, which doctors predicted would kill him in two years. Though the film is about a scientific genius it concentrates on the relationship between Stephen and Jane and her continual support and love for her husband despite the daily hardships. It is not so much a story about the science of the mind but rather a story about the science of the heart – for this is first and foremost a love story and a beautiful one at that. Ironically it is Stephen’s mind that first attracts Jane to him. You see the men’s shirts glow more than the women’s dresses? Yes. Do you know why? Why? Tide. The washing powder. The fluorescent in the washing powder is caught by the UV light. Why do you know that? It is often daunting for an actor to have the person you are actually playing appear on set, but really it was a great compliment to Redmayne’s portrayal of Stephen Hawking when he did so. In an email which Hawking sent to director James Marsh, he said there were certain points www.moviesbymills.com