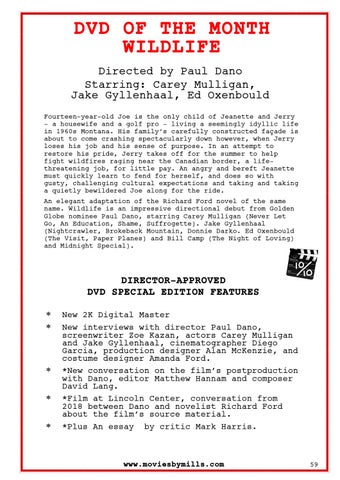 DVD OF THE MONTH WILDLIFE Directed by Paul Dano Starring: Carey Mulligan, Jake Gyllenhaal, Ed Oxenbould Fourteen-year-old Joe is the only child of Jeanette and Jerry – a housewife and a golf pro – living a seemingly idyllic life in 1960s Montana. His family’s carefully constructed façade is about to come crashing spectacularly down however, when Jerry loses his job and his sense of purpose. In an attempt to restore his pride, Jerry takes off for the summer to help fight wildfires raging near the Canadian border, a lifethreatening job, for little pay. An angry and bereft Jeanette must quickly learn to fend for herself, and does so with gusty, challenging cultural expectations and taking and taking a quietly bewildered Joe along for the ride. An elegant adaptation of the Richard Ford novel of the same name. Wildlife is an impressive directional debut from Golden Globe nominee Paul Dano, starring Carey Mulligan (Never Let Go, An Education, Shame, Suffrogette). Jake Gyllenhaal (Nightcrawler, Brokeback Mountain, Donnie Darko. Ed Oxenbould (The Visit, Paper Planes) and Bill Camp (The Night of Loving) and Midnight Special).