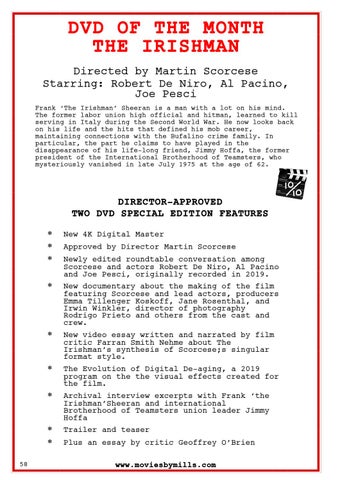 DVD OF THE MONTH THE IRISHMAN Directed by Martin Scorcese Starring: Robert De Niro, Al Pacino, Joe Pesci Frank ‘The Irishman’ Sheeran is a man with a lot on his mind. The former labor union high official and hitman, learned to kill serving in Italy during the Second World War. He now looks back on his life and the hits that defined his mob career, maintaining connections with the Bufalino crime family. In particular, the part he claims to have played in the disappearance of his life-long friend, Jimmy Hoffa, the former president of the International Brotherhood of Teamsters, who mysteriously vanished in late July 1975 at the age of 62.

Approved by Director Martin Scorcese Newly edited roundtable conversation among Scorcese and actors Robert De Niro, Al Pacino and Joe Pesci, originally recorded in 2019. New documentary about the making of the film featuring Scorcese and lead actors, producers Emma Tillenger Koskoff, Jane Rosenthal, and Irwin Winkler, director of photography Rodrigo Prieto and others from the cast and crew. New video essay written and narrated by film critic Farran Smith Nehme about The Irishman’s synthesis of Scorcese;s singular format style. The Evolution of Digital De-aging, a 2019 program on the the visual effects created for the film. Archival interview excerpts with Frank ‘the Irishman’Sheeran and international Brotherhood of Teamsters union leader Jimmy Hoffa Trailer and teaser Plus an essay by critic Geoffrey O’Brien www.moviesbymills.com