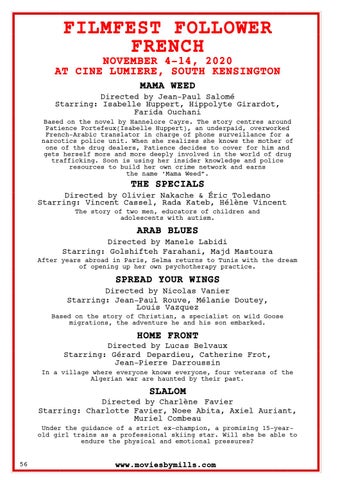 NOVEMBER 4-14, 2020 AT CINE LUMIERE, SOUTH KENSINGTON MAMA WEED Directed by Jean-Paul Salomé Starring: Isabelle Huppert, Hippolyte Girardot, Farida Ouchani Based on the novel by Hannelore Cayre. The story centres around Patience Portefeux(Isabelle Huppert), an underpaid, overworked French-Arabic translator in charge of phone surveillance for a narcotics police unit. When she realizes she knows the mother of one of the drug dealers, Patience decides to cover for him and gets herself more and more deeply involved in the world of drug trafficking. Soon is using her insider knowledge and police resources to build her own crime network and earns the name ‘Mama Weed”.

ARAB BLUES Directed by Manele Labidi Starring: Golshifteh Farahani, Majd Mastoura After years abroad in Paris, Selma returns to Tunis with the dream of opening up her own psychotherapy practice.

SPREAD YOUR WINGS Directed by Nicolas Vanier Starring: Jean-Paul Rouve, Mélanie Doutey, Louis Vazquez Based on the story of Christian, a specialist on wild Goose migrations, the adventure he and his son embarked.

HOME FRONT Directed by Lucas Belvaux Starring: Gérard Depardieu, Catherine Frot, Jean-Pierre Darroussin In a village where everyone knows everyone, four veterans of the Algerian war are haunted by their past.

SLALOM Directed by Charlène Favier Starring: Charlotte Favier, Noee Abita, Axiel Auriant, Muriel Combeau Under the guidance of a strict ex-champion, a promising 15-yearold girl trains as a professional skiing star. Will she be able to endure the physical and emotional pressures?