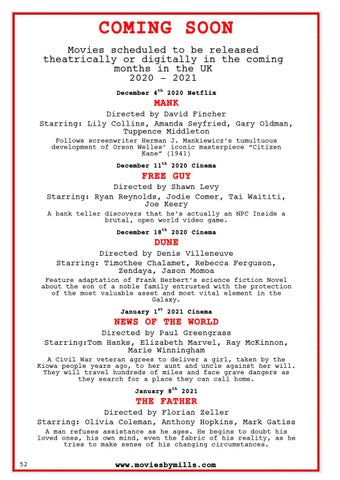 DUNE Directed by Denis Villeneuve Starring: Timothee Chalamet, Rebecca Ferguson, Zendaya, Jason Momoa Feature adaptation of Frank Herbert’s science fiction Novel about the son of a noble family entrusted with the protection of the most valuable asset and most vital element in the Galaxy. January 1st 2021 Cinema

NEWS OF THE WORLD Directed by Paul Greengrass Starring:Tom Hanks, Elizabeth Marvel, Ray McKinnon, Marie Winningham A Civil War veteran agrees to deliver a girl, taken by the Kiowa people years ago, to her aunt and uncle against her will. They will travel hundreds of miles and face grave dangers as they search for a place they can call home. January 8th 2021

THE FATHER Directed by Florian Zeller Starring: Olivia Coleman, Anthony Hopkins, Mark Gatiss A man refuses assistance as he ages. He begins to doubt his loved ones, his own mind, even the fabric of his reality, as he tries to make sense of his changing circumstances. 52