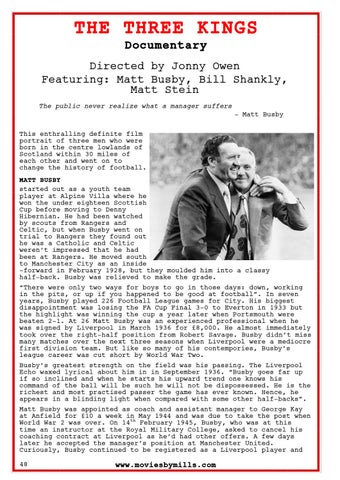 THE THREE KINGS Documentary Directed by Jonny Owen Featuring: Matt Busby, Bill Shankly, Matt Stein The public never realize what a manager suffers - Matt Busby This enthralling definite film portrait of three men who were born in the centre lowlands of Scotland within 30 miles of each other and went on to change the history of football. MATT BUSBY started out as a youth team player at Alpine Villa where he won the under eighteen Scottish Cup before moving to Denny Hibernian. He had been watched by scouts from Rangers and Celtic, but when Busby went on trial to Rangers they found out he was a Catholic and Celtic weren’t impressed that he had been at Rangers. He moved south to Manchester City as an inside -forward in February 1928, but they moulded him into a classy half-back. Busby was relieved to make the grade. “There were only two ways for boys to go in those days: down, working in the pits, or up if you happened to be good at football”. In seven years, Busby played 226 Football League games for City. His biggest disappointment was losing the FA Cup Final 3-0 to Everton in 1933 but the highlight was winning the cup a year later when Portsmouth were beaten 2-1. At 26 Matt Busby was an experienced professional when he was signed by Liverpool in March 1936 for £8,000. He almost immediately took over the right-half position from Robert Savage. Busby didn’t miss many matches over the next three seasons when Liverpool were a mediocre first division team. But like so many of his contempories, Busby’s league career was cut short by World War Two. Busby’s greatest strength on the field was his passing. The Liverpool Echo waxed lyrical about him in in September 1936. “Busby goes far up if so inclined and when he starts his upward trend one knows his command of the ball will be such he will not be dispossessed. He is the richest and most practised passer the game has ever known. Hence, he appears in a blinding light when compared with some other half-backs”. Matt Busby was appointed as coach and assistant manager to George Kay at Anfield for £10 a week in May 1944 and was due to take the post when World War 2 was over. On 14th February 1945, Busby, who was at this time an instructor at the Royal Military College, asked to cancel his coaching contract at Liverpool as he’d had other offers. A few days later he accepted the manager’s position at Manchester United. Curiously, Busby continued to be registered as a Liverpool player and 48