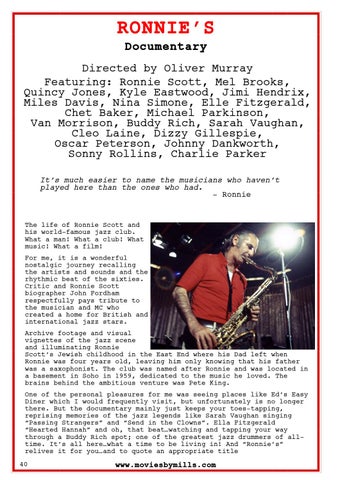 The life of Ronnie Scott and his world-famous jazz club. What a man! What a club! What music! What a film! For me, it is a wonderful nostalgic journey recalling the artists and sounds and the rhythmic beat of the sixties. Critic and Ronnie Scott biographer John Fordham respectfully pays tribute to the musician and MC who created a home for British and international jazz stars. Archive footage and visual vignettes of the jazz scene and illuminating Ronnie Scott’s Jewish childhood in the East End where his Dad left when Ronnie was four years old, leaving him only knowing that his father was a saxophonist. The club was named after Ronnie and was located in a basement in Soho in 1959, dedicated to the music he loved. The brains behind the ambitious venture was Pete King. One of the personal pleasures for me was seeing places like Ed’s Easy Diner which I would frequently visit, but unfortunately is no longer there. But the documentary mainly just keeps your toes-tapping, reprising memories of the jazz legends like Sarah Vaughan singing “Passing Strangers” and “Send in the Clowns”. Ella Fitzgerald “Hearted Hannah” and oh, that beat…watching and tapping your way through a Buddy Rich spot; one of the greatest jazz drummers of alltime. It’s all here…what a time to be living in! And “Ronnie’s” relives it for you…and to quote an appropriate title 40