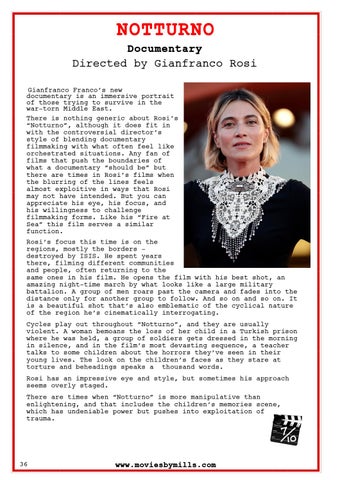 NOTTURNO Documentary Directed by Gianfranco Rosi Gianfranco Franco’s new documentary is an immersive portrait of those trying to survive in the war-torn Middle East. There is nothing generic about Rosi’s “Notturno”, although it does fit in with the controversial director’s style of blending documentary filmmaking with what often feel like orchestrated situations. Any fan of films that push the boundaries of what a documentary “should be” but there are times in Rosi’s films when the blurring of the lines feels almost exploitive in ways that Rosi may not have intended. But you can appreciate his eye, his focus, and his willingness to challenge filmmaking forms. Like his “Fire at Sea” this film serves a similar function.

Rosi’s focus this time is on the regions, mostly the borders – destroyed by ISIS. He spent years there, filming different communities and people, often returning to the same ones in his film. He opens the film with his best shot, an amazing night-time march by what looks like a large military battalion. A group of men roars past the camera and fades into the distance only for another group to follow. And so on and so on. It is a beautiful shot that’s also emblematic of the cyclical nature of the region he’s cinematically interrogating. Cycles play out throughout “Notturno”, and they are usually violent. A woman bemoans the loss of her child in a Turkish prison where he was held, a group of soldiers gets dressed in the morning in silence, and in the film’s most devasting sequence, a teacher talks to some children about the horrors they’ve seen in their young lives. The look on the children’s faces as they stare at torture and beheadings speaks a thousand words. Rosi has an impressive eye and style, but sometimes his approach seems overly staged. There are times when “Notturno” is more manipulative than enlightening, and that includes the children’s memories scene, which has undeniable power but pushes into exploitation of trauma.