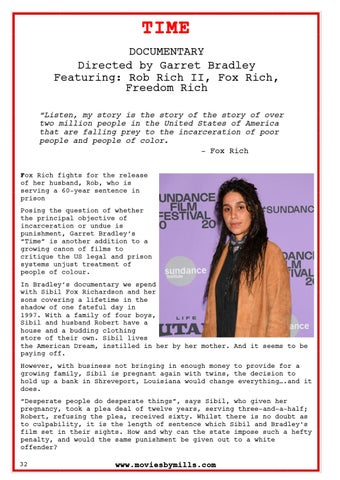 TIME DOCUMENTARY Directed by Garret Bradley Featuring: Rob Rich II, Fox Rich, Freedom Rich “Listen, my story is the story of the story of over two million people in the United States of America that are falling prey to the incarceration of poor people and people of color. - Fox Rich Fox Rich fights for the release of her husband, Rob, who is serving a 60-year sentence in prison Posing the question of whether the principal objective of incarceration or undue is punishment, Garret Bradley’s “Time” is another addition to a growing canon of films to critique the US legal and prison systems unjust treatment of people of colour. In Bradley’s documentary we spend with Sibil Fox Richardson and her sons covering a lifetime in the shadow of one fateful day in 1997. With a family of four boys, Sibil and husband Robert have a house and a budding clothing store of their own. Sibil lives the American Dream, instilled in her by her mother. And it seems to be paying off. However, with business not bringing in enough money to provide for a growing family, Sibil is pregnant again with twins, the decision to hold up a bank in Shreveport, Louisiana would change everything….and it does. “Desperate people do desperate things”, says Sibil, who given her pregnancy, took a plea deal of twelve years, serving three-and-a-half; Robert, refusing the plea, received sixty. Whilst there is no doubt as to culpability, it is the length of sentence which Sibil and Bradley’s film set in their sights. How and why can the state impose such a hefty penalty, and would the same punishment be given out to a white offender? 32