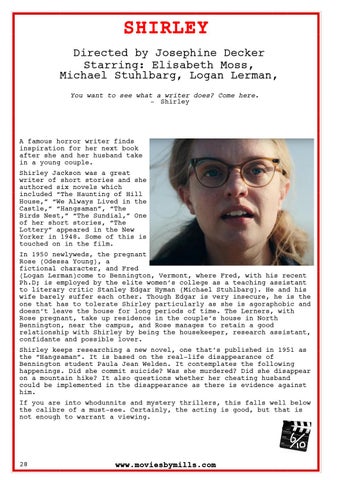 A famous horror writer finds inspiration for her next book after she and her husband take in a young couple. Shirley Jackson was a great writer of short stories and she authored six novels which included “The Haunting of Hill House,” “We Always Lived in the Castle,” “Hangsaman”, “The Birds Nest,” “The Sundial,” One of her short stories, “The Lottery” appeared in the New Yorker in 1948. Some of this is touched on in the film. In 1950 newlyweds, the pregnant Rose (Odessa Young), a fictional character, and Fred (Logan Lerman)come to Bennington, Vermont, where Fred, with his recent Ph.D; is employed by the elite women’s college as a teaching assistant to literary critic Stanley Edgar Hyman (Michael Stuhlbarg). He and his wife barely suffer each other. Though Edgar is very insecure, he is the one that has to tolerate Shirley particularly as she is agoraphobic and doesn’t leave the house for long periods of time. The Lerners, with Rose pregnant, take up residence in the couple’s house in North Bennington, near the campus, and Rose manages to retain a good relationship with Shirley by being the housekeeper, research assistant, confidante and possible lover. Shirley keeps researching a new novel, one that’s published in 1951 as the “Hangsaman”. It is based on the real-life disappearance of Bennington student Paula Jean Welden. It contemplates the following happenings. Did she commit suicide? Was she murdered? Did she disappear on a mountain hike? It also questions whether her cheating husband could be implemented in the disappearance as there is evidence against him. If you are into whodunnits and mystery thrillers, this falls well below the calibre of a must-see. Certainly, the acting is good, but that is not enough to warrant a viewing.