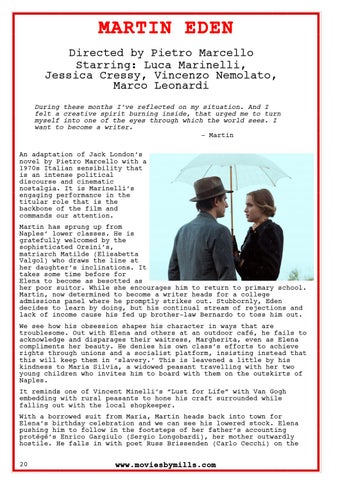 MARTIN EDEN Directed by Pietro Marcello Starring: Luca Marinelli, Jessica Cressy, Vincenzo Nemolato, Marco Leonardi During these months I’ve reflected on my situation. And I felt a creative spirit burning inside, that urged me to turn myself into one of the eyes through which the world sees. I want to become a writer. - Martin An adaptation of Jack London’s novel by Pietro Marcello with a 1970s Italian sensibility that is an intense political discourse and cinematic nostalgia. It is Marinelli’s engaging performance in the titular role that is the backbone of the film and commands our attention. Martin has sprung up from Naples’ lower classes. He is gratefully welcomed by the sophisticated Orsini’s, matriarch Matilde (Elisabetta Valgol) who draws the line at her daughter’s inclinations. It takes some time before for Elena to become as besotted as her poor suitor. While she encourages him to return to primary school. Martin, now determined to become a writer heads for a college admissions panel where he promptly strikes out. Stubbornly, Eden decides to learn by doing, but his continual stream of rejections and lack of income cause his fed up brother-law Bernardo to toss him out. We see how his obsession shapes his character in ways that are troublesome. Out with Elena and others at an outdoor café, he fails to acknowledge and disparages their waitress, Margherita, even as Elena compliments her beauty. He denies his own class’s efforts to achieve rights through unions and a socialist platform, insisting instead that this will keep them in ‘slavery.’ This is leavened a little by his kindness to Maria Silvia, a widowed peasant travelling with her two young children who invites him to board with them on the outskirts of Naples. It reminds one of Vincent Minelli’s “Lust for Life” with Van Gogh embedding with rural peasants to hone his craft surrounded while falling out with the local shopkeeper. With a borrowed suit from Maria, Martin heads back into town for Elena’s birthday celebration and we can see his lowered stock. Elena pushing him to follow in the footsteps of her father’s accounting protégé’s Enrico Gargiulo (Sergio Longobardi), her mother outwardly hostile. He falls in with poet Russ Brissenden (Carlo Cecchi) on the 20