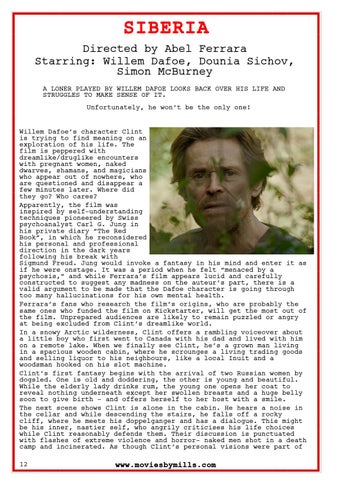 SIBERIA Directed by Abel Ferrara Starring: Willem Dafoe, Dounia Sichov, Simon McBurney A LONER PLAYED BY WILLEM DAFOE LOOKS BACK OVER HIS LIFE AND STRUGGLES TO MAKE SENSE OF IT. Unfortunately, he won’t be the only one!

Willem Dafoe’s character Clint is trying to find meaning on an exploration of his life. The film is peppered with dreamlike/druglike encounters with pregnant women, naked dwarves, shamans, and magicians who appear out of nowhere, who are questioned and disappear a few minutes later. Where did they go? Who cares? Apparently, the film was inspired by self-understanding techniques pioneered by Swiss psychoanalyst Carl G. Jung in his private diary “The Red Book”, in which he reconsidered his personal and professional direction in the dark years following his break with Sigmund Freud. Jung would invoke a fantasy in his mind and enter it as if he were onstage. It was a period when he felt “menaced by a psychosis,” and while Ferrara’s film appears lucid and carefully constructed to suggest any madness on the auteur’s part, there is a valid argument to be made that the Dafoe character is going through too many hallucinations for his own mental health. Ferrara’s fans who research the film’s origins, who are probably the same ones who funded the film on Kickstarter, will get the most out of the film. Unprepared audiences are likely to remain puzzled or angry at being excluded from Clint’s dreamlike world. In a snowy Arctic wilderness, Clint offers a rambling voiceover about a little boy who first went to Canada with his dad and lived with him on a remote lake. When we finally see Clint, he’s a grown man living in a spacious wooden cabin, where he scrounges a living trading goods and selling liquor to his neighbours, like a local Inuit and a woodsman hooked on his slot machine. Clint’s first fantasy begins with the arrival of two Russian women by dogsled. One is old and doddering, the other is young and beautiful. While the elderly lady drinks rum, the young one opens her coat to reveal nothing underneath except her swollen breasts and a huge belly soon to give birth – and offers herself to her host with a smile. The next scene shows Clint is alone in the cabin. He hears a noise in the cellar and while descending the stairs, he falls off a rocky cliff, where he meets his doppelganger and has a dialogue. This might be his inner, nastier self, who angrily criticises his life choices while Clint reasonably defends them. Their discussion is punctuated with flashes of extreme violence and horror- naked men shot in a death camp and incinerated. As though Clint’s personal visions were part of 12