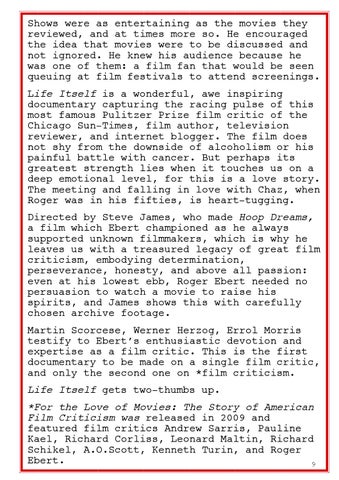 Shows were as entertaining as the movies they reviewed, and at times more so. He encouraged the idea that movies were to be discussed and not ignored. He knew his audience because he was one of them: a film fan that would be seen queuing at film festivals to attend screenings. Life Itself is a wonderful, awe inspiring documentary capturing the racing pulse of this most famous Pulitzer Prize film critic of the Chicago Sun-Times, film author, television reviewer, and internet blogger. The film does not shy from the downside of alcoholism or his painful battle with cancer. But perhaps its greatest strength lies when it touches us on a deep emotional level, for this is a love story. The meeting and falling in love with Chaz, when Roger was in his fifties, is heart-tugging. Directed by Steve James, who made Hoop Dreams, a film which Ebert championed as he always supported unknown filmmakers, which is why he leaves us with a treasured legacy of great film criticism, embodying determination, perseverance, honesty, and above all passion: even at his lowest ebb, Roger Ebert needed no persuasion to watch a movie to raise his spirits, and James shows this with carefully chosen archive footage. Martin Scorcese, Werner Herzog, Errol Morris testify to Ebertâ&#x20AC;&#x2122;s enthusiastic devotion and expertise as a film critic. This is the first documentary to be made on a single film critic, and only the second one on *film criticism. Life Itself gets two-thumbs up. *For the Love of Movies: The Story of American Film Criticism was released in 2009 and featured film critics Andrew Sarris, Pauline Kael, Richard Corliss, Leonard Maltin, Richard Schikel, A.O.Scott, Kenneth Turin, and Roger Ebert. 9