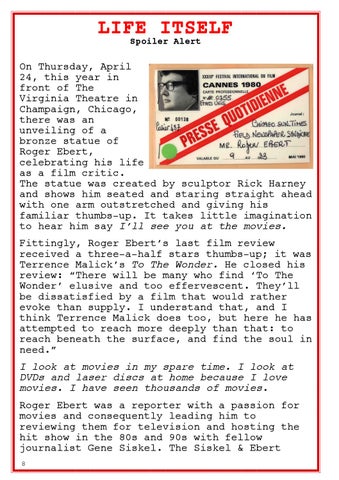 On Thursday, April 24, this year in front of The Virginia Theatre in Champaign, Chicago, there was an unveiling of a bronze statue of Roger Ebert, celebrating his life as a film critic. The statue was created by sculptor Rick Harney and shows him seated and staring straight ahead with one arm outstretched and giving his familiar thumbs-up. It takes little imagination to hear him say I’ll see you at the movies. Fittingly, Roger Ebert’s last film review received a three-a-half stars thumbs-up; it was Terrence Malick’s To The Wonder. He closed his review: “There will be many who find ‘To The Wonder’ elusive and too effervescent. They’ll be dissatisfied by a film that would rather evoke than supply. I understand that, and I think Terrence Malick does too, but here he has attempted to reach more deeply than that: to reach beneath the surface, and find the soul in need.” I look at movies in my spare time. I look at DVDs and laser discs at home because I love movies. I have seen thousands of movies. Roger Ebert was a reporter with a passion for movies and consequently leading him to reviewing them for television and hosting the hit show in the 80s and 90s with fellow journalist Gene Siskel. The Siskel & Ebert 8