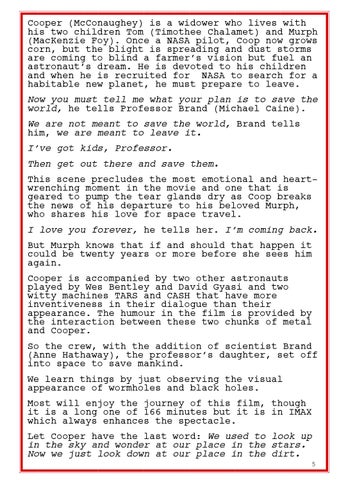 Cooper (McConaughey) is a widower who lives with his two children Tom (Timothee Chalamet) and Murph (MacKenzie Foy). Once a NASA pilot, Coop now grows corn, but the blight is spreading and dust storms are coming to blind a farmer’s vision but fuel an astronaut’s dream. He is devoted to his children and when he is recruited for NASA to search for a habitable new planet, he must prepare to leave. Now you must tell me what your plan is to save the world, he tells Professor Brand (Michael Caine). We are not meant to save the world, Brand tells him, we are meant to leave it. I’ve got kids, Professor. Then get out there and save them. This scene precludes the most emotional and heartwrenching moment in the movie and one that is geared to pump the tear glands dry as Coop breaks the news of his departure to his beloved Murph, who shares his love for space travel. I love you forever, he tells her. I’m coming back. But Murph knows that if and should that happen it could be twenty years or more before she sees him again. Cooper is accompanied by two other astronauts played by Wes Bentley and David Gyasi and two witty machines TARS and CASH that have more inventiveness in their dialogue than their appearance. The humour in the film is provided by the interaction between these two chunks of metal and Cooper. So the crew, with the addition of scientist Brand (Anne Hathaway), the professor’s daughter, set off into space to save mankind. We learn things by just observing the visual appearance of wormholes and black holes. Most will enjoy the journey of this film, though it is a long one of 166 minutes but it is in IMAX which always enhances the spectacle. Let Cooper have the last word: We used to look up in the sky and wonder at our place in the stars. Now we just look down at our place in the dirt. 5