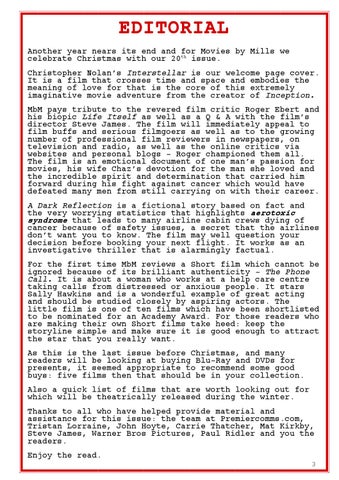 EDITORIAL Another year nears its end and for Movies by Mills we celebrate Christmas with our 20th issue. Christopher Nolan’s Interstellar is our welcome page cover. It is a film that crosses time and space and embodies the meaning of love for that is the core of this extremely imaginative movie adventure from the creator of Inception. MbM pays tribute to the revered film critic Roger Ebert and his biopic Life Itself as well as a Q & A with the film’s director Steve James. The film will immediately appeal to film buffs and serious filmgoers as well as to the growing number of professional film reviewers in newspapers, on television and radio, as well as the online critics via websites and personal blogs – Roger championed them all. The film is an emotional document of one man’s passion for movies, his wife Chaz’s devotion for the man she loved and the incredible spirit and determination that carried him forward during his fight against cancer which would have defeated many men from still carrying on with their career. A Dark Reflection is a fictional story based on fact and the very worrying statistics that highlights aerotoxic syndrome that leads to many airline cabin crews dying of cancer because of safety issues, a secret that the airlines don’t want you to know. The film may well question your decision before booking your next flight. It works as an investigative thriller that is alarmingly factual. For the first time MbM reviews a Short film which cannot be ignored because of its brilliant authenticity – The Phone Call. It is about a woman who works at a help care centre taking calls from distressed or anxious people. It stars Sally Hawkins and is a wonderful example of great acting and should be studied closely by aspiring actors. The little film is one of ten films which have been shortlisted to be nominated for an Academy Award. For those readers who are making their own Short films take heed: keep the storyline simple and make sure it is good enough to attract the star that you really want. As this is the last issue before Christmas, and many readers will be looking at buying Blu-Ray and DVDs for presents, it seemed appropriate to recommend some good buys: five films then that should be in your collection. Also a quick list of films that are worth looking out for which will be theatrically released during the winter. Thanks to all who have helped provide material and assistance for this issue: the team at Premiercomms.com, Tristan Lorraine, John Hoyte, Carrie Thatcher, Mat Kirkby, Steve James, Warner Bros Pictures, Paul Ridler and you the readers. Enjoy the read. 3